I can't tell you how excited I am to start this month out with today's read. Now, I'm not really a Jane Austen fan  (gasp?). It's true. Her works never really grabbed me, and yet, this one caught my eye. And I'm so glad it did! Using facts from Jane Austen's life, this book swoops a thirteen-year-old version of her into a mystery. It's intended for the middle grade audience...after reading it, I'd say the upper end more. A tween read, in my opinion. It's definitely a good one, too. Too bad, you have to wait until April 23rd for this one, but mark your calendars because it's worth it.
(Gosh, I hope this is the beginning to a series) 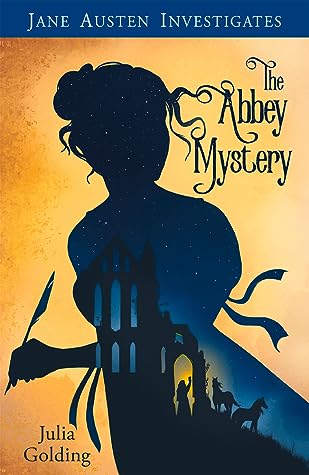 THE ABBEY MYSTERY
Jane Austen Investigates
by Julia Golding
Lion Fiction
Middle Grade Mystery
ages 9 to 14
192 pages
Jane Austen turns detective in this spooky historical adventure by award-winning author Julia Golding!It’s 1789 and a young Jane Austen turns detective as she seeks to solve the mysterious happenings at Southmoor Abbey. When a carriage accident forces a change of plans, 13-year-old Jane is sent to be a companion to Lady Cromwell for a week as the household prepares to celebrate the eldest son’s coming-of-age party. While there, Jane vows to solve the mystery of the ghostly monk in the Abbey grounds – for she does not believe in such stories!But this is not the only strange occurrence for the adventurous young Jane to investigate. There are shivery night-time investigations, an Indian girl with secret talents, a library fire, two prize horses in danger, and friends to save from false accusations.With notebook in hand and her faithful dog Grandison by her side, will Jane overcome the continuous obstacles and find out the truth?
BOOK DEPOSITORY   /    GOODREADS   /    B&N    /     KOBO     /    AMAZON
BOOK BLINK
* based on some facts from Jane Austen's life
* set nicely in time frame
* vivid characters
* mystery well woven
* tension mixed with humor, too
MY TIDBITS
This is the kind of read to sink into and get lost in until the very last page. And that's exactly what I did.
Jane's entire family is known to be adventurous and a bit unconventional. Despite this, they are well respected, and her older sister is requested to serve as companionship for the Lady of a wealthy family until their son has his coming-of-age party. But when Jane's sister is injured, she has to jump in. Her older brother spruces things up even more, when he makes a bet with her about the existence of a ghost at the Abby. Excited to start that investigation and win the bet, Jane's stay at the home begins. It brings all sorts of unexpected twists, most of which have nothing to do with the ghost in the slightest. But each one leaves her in dangerous situations and discovering secrets she should know nothing about.
When I started reading this, I was a little unsure how it would proceed. It is set in the later 1700's and stays as solid in that time frame as possible. Which means the dialogue and such also slides into this category. The terminology and word choice made me wonder if this one might steer out of the intended middle grade direction. But this fear was completely unnecessary. This book is very well done, the characters are fun to accompany, and the plot made it impossible to set down. Still, I do see this one more geared to the tween audience.
Jane is portrayed as a curious, risk-happy, slightly spunky, and yet, very aware of her duties as a young lady, kind of girl. And she's clever. Add her love for her 'lap-dog', and it's very hard not to like her. She makes mistakes but is quick to admit it and jump right back in. Plus, her moral compass is very well set, where it counts...even if this isn't acceptable to society's rules. She's the kind of girl, one wishes they could run around with and join in on her adventures.
While the historic time frame is very well portrayed and slips in masterfully without boring descriptions, it's the well-woven mystery, which really draws in. There are more than a few characters, but each has a personality of their own. They have their own troubles, and even those which are 'honorable' might not be perfectly so. This makes for a wide selection of 'who-dun-its', and the true instigators are hard to find until the end. But there are also several sub-plots running along the side, which make it hard not to fever for some of the other characters and hope they work out their problems as well. Plus, there are a few life lessons tossed into the mix.
I can highly recommend this one to mystery lovers, who enjoy a well-done jaunt into the past. While Jane Austen fans will enjoy it, by no means is it only for them (I, personally, have never been a Jane Austen fan and enjoyed every page). I really hope this is the beginning to a series because it promises to be a good one.
on March 01, 2021