It's wild-card day! At the beginning of every month, I have a book I'd love to slide in somewhere but am never sure where it will go. Today's review is a book I picked up over on Netgalley because I just loved the cover. Considering Asian anime, manga and such are huge among kids, there's no way I could pass by this one...(and then, there's the cover because I seem to have a problem passing up on dazzling covers).
Was this one worth all of the effort? Well, let's find out! 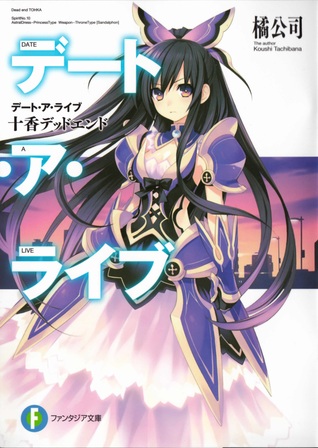 DATE A LIVE
Dead End Tohka
by Koushi Tachibana
Illustrated by Tsunako
Kadokawa/Fujimi Shobo
Young Adult Fantasy/Romance
264 pages
Machine translated description:April 10th. Today was the first school day morning after the end of Spring vacation. After being woken up by his cute little sister, Itsuka Shidou believed that it would be the start of another normal day. As for predicting the chance meeting with the girl who called herself a Spirit......Along with a sudden shockwave, the townscape vanished without a trace. In a corner of the street which had now become a crater, the girl was there."—You, have you come to kill me too?"She is the disaster that will destroy humanity, a monster of unknown origin, and a being rejected by the world. There are only two ways to stop this girl: annihilation, or conversation. His little sister Kotori, wrapped in a military uniform, thus said to Shidou: "Since it's like this, just go date her, and make the Spirit fall for you!" "Wh.. whaaaaaaaat!?" Enter a new age of boy meets girl!!
GOODREADS   /    AMAZON
BOOK BLINK
* light novel...not a graphic novel or a manga
* fast-paced
* humorous
MY TIDBITS
An unbelievable story background tangles with a super-powerful being, a meek hero, tons of humor, and more than enough moments of action to drive this one through in a delightful way.
(I always do a run-down of the plot, at this point, but hold on tight because this one is a little out there...)
In a world, where powerful spirits can appear and cause earthquakes and blasts, which leave entire cities destroyed...people in Japan (but an alternate reality of one)...are again being faced with the threat of destruction and have been in expectation for five years or so with bated breath. This is where teen Shidou lives, a meeker guy, who totally adores his younger sister. When the new school term begins...and after a few quirky scenes with his sister and other humorous happenings...he comes face to face with a beautiful girl, who happens to be one of these spirits. And she's confused, sad, and just not sure about anything anymore, since she's the cause of some new destruction but really doesn't want to hurt anything. Since Shidou's younger sister (a middle-schooler, btw) happens to secretly work for the government and knows that Shidou actually (unknown to him) holds the power to seal spirits. So, the little sister convinces him that he should try to get together with this spirit on a romantic level and become girlfriend and boyfriend...and that while the world wants to destroy the girl. (As said, it's a lot...and goes more through the series, I guess)
First off, I am super disappointed this wasn't a graphic novel or manga but rather a light novel. There are wonderful illustrations sprinkled in, but this would have been so much better in graphic novel form. I constantly caught myself trying to picture the scenes, while reading, as they would have been in graphic form...which got a little irritating. Some of this was due to my expectations, I think, but the tale is written as if it is the basic story before a graphic novel. For example, the dialogue between two people bounces back and forth with just dialogue (no tags or anything) for over a dozen phrases. Or the descriptions run just deep enough to imagine what the image might look like. This threw me off a little
That said, this is a super fun story. The anime flair is strong and holds amazing moments, tons silly humor, a heroine extreme but lost, a hero who as a guy can withstand everything, and tons of awkward moments along with mega-blasts when the fighting begins. What I think makes this one so fun isn't only the really odd tale (it works, for some reason) but also the hero. He isn't strong or able to rescue the lady in distress...at least, not with his own amazingness. Plus, he's very well aware of ridiculous and insane some of the situations are. This was refreshing.
Wrapped up, this is a fun tale which rolls along quick and with tons of entertainment. It's light...meaning don't expect a lot of depth...and that's good so.
on March 10, 2021