Today's book takes a totally different swing into the sibling relationship corner. I read this one, and honestly, it's steps beyond my comfort zone. While I did consider not reviewing this one, I changed my mind because it is superbly written and addresses issues many young adult readers will connect with. Plus, it leaves intriguing food for thought. 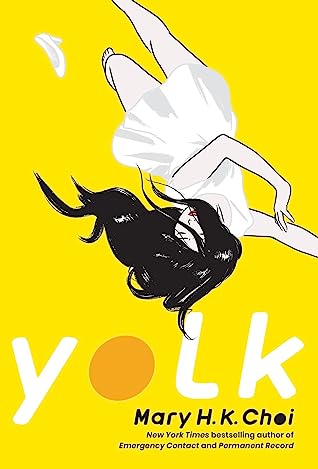 YOLK
by Mary H.K. Choi
Simon & Schuster
Young Adult Contemporary
400 pages
* Triggers: eating disorders, cancer, female fertility, heavy 'bad' language usage
From New York Times bestselling author Mary H.K. Choi comes a funny and emotional story about two estranged sisters switching places and committing insurance fraud to save one of their lives.Jayne Baek is barely getting by. She shuffles through fashion school, saddled with a deadbeat boyfriend, clout-chasing friends, and a wretched eating disorder that she’s not fully ready to confront. But that’s New York City, right? At least she isn’t in Texas anymore, and is finally living in a city that feels right for her.On the other hand, her sister June is dazzlingly rich with a high-flying finance job and a massive apartment. Unlike Jayne, June has never struggled a day in her life. Until she’s diagnosed with uterine cancer.Suddenly, these estranged sisters who have nothing in common are living together. Because sisterly obligations are kind of important when one of you is dying.
BOOK DEPOSITORY   /    GOODREADS    /    B&N    /    KOBO    /    AMAZON

BOOK BLINK
* addresses sibling relationships (not in usual manner)
* Korean struggles living in the US
* coming-of-age
* fight with cancer
* getting life turned around
MY TIDBITS
With tons of thought and a masterful weave, this book jumps with both legs into tough topics, jerks the emotions all over the place, and leaves a lasting impression.

Beginning college student Jayne's life is tough, and she's fighting an eating disorder among other things. Her sister, June, has the 'perfect' life of luxury...not the Jayne knows her. Jayne's battle with her identity as a 2nd generation Korean, extreme self-critical issues, and general dislike of everything about herself, throws her from one disastrous relationship into another. Until she meets June. June has been diagnosed with cancer and has stolen Jayne's identity to claim social health insurance payments to pay for her treatments. While the two aren't about to spend giggly moments together, they might be exactly what they other one needs.
I expected a slightly more whimsical...or at least, not quite so harsh...tale. But this book dives into the darker side of a coming-of-age and other issues. This is not an easy, light read, and not one for less mature readers. Topics such as eating disorders and self-identity issues hit with full force. There is also no pardon when describing certain female issues. Nor is there any halt in the harsher language area. So, this is definitely not a book for everyone. But for those who are ready for such topics...well, they are in for a treat.
This is a very well-woven tale, which digs close to both characters and their issues. And these characters, especially Jayne, are not sweet. The author does an amazing job with Jayne...and not in the expected way. Jayne is a character with more sharp edges, corners and hard spots than any person should have. She is not nice, not sympathetic, and very hard to embrace. And yet, there's something about her which makes this tale stick. I disliked her from beginning to end. Completely. But that is part of the story, and a bit of what makes it as powerful as it is.
Sibling relations, even when they aren't smooth and nice, hold a special significance. June does her best to help Jayne get a grip on her life, and she does this while struggling with cancer. Jayne, on the other hand, doesn't ignore her sister's issues, either, but offers help as needed. It's a strong tale for family and being there for each other no matter what. And that glides along with all of the other themes, each which pack their own punch. The only real criticism I have concerns the ending, which leaves June's condition hanging. So, it feels as if things aren't really wrapped up.
Summed up, this is a book which tackles difficult themes head-on and with grit, roughness, and without a pinch of sugar. But it's powerful and leaves thoughts lingering behind. And that's what a good read is also about.
And here she is...
Mary H.K. Choi is a writer for The New York Times, GQ, Wired, and The Atlantic. She has written comics for Marvel and DC, as well as a collection of essays called Oh, Never Mind. Her novels Emergency Contact and Permanent Record were New York Times bestsellers. She is the host of Hey, Cool Job!, a podcast about jobs, and Hey, Cool Life!, a podcast about mental health and creativity. Mary grew up in Hong Kong and Texas and now lives in New York. Follow her on Twitter @ChoitotheWorld.
on March 02, 2021