With flowers peeking their heads out to greet Spring and nature now awakening, this book slides in with great timing. Add the fact that we still have Women's History month,  and it's perfect for today's review spot. I'll admit I had never heard of Marjory Stoneman Douglas (I learn as much with these books as kids do!) and was inspired by her work. Plus, who doesn't love a peek at the gorgeous Everglades?
Before I say more...it's time for trip into nature! 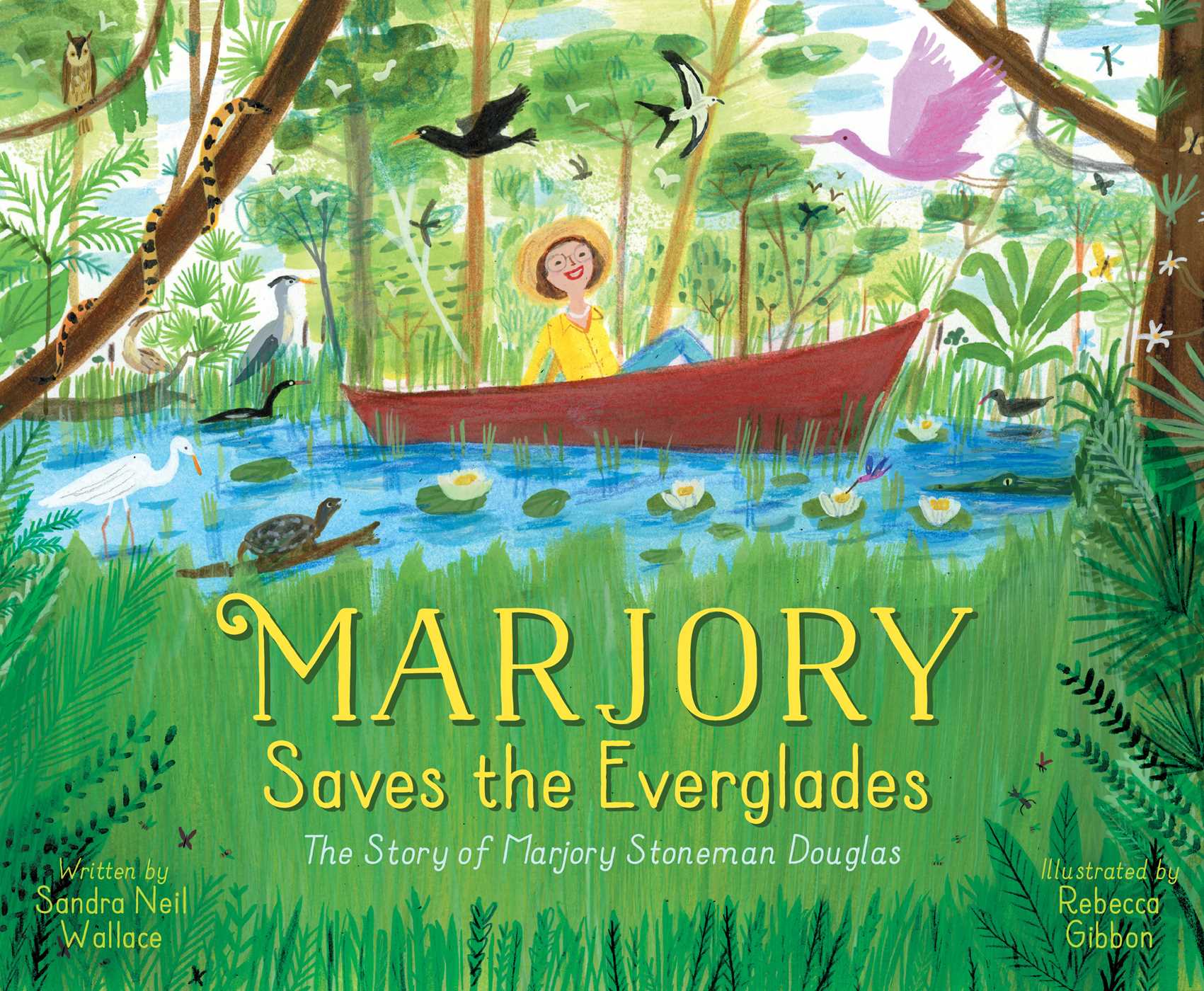 MARJORY SAVES THE EVERGLADES
The Story of Marjory Stoneman Douglas
by Sandra Neil Wallace
Illustrated by Rebecca Gibbon
Paula Wiseman Books
Picture Book
56 pages
ages 4 to 8
From acclaimed children’s book biographer Sandra Neil Wallace comes the inspiring and little-known story of Marjory Stoneman Douglas, the remarkable journalist who saved the Florida Everglades from development and ruin.Marjory Stoneman Douglas didn’t intend to write about the Everglades but when she returned to Florida from World War I, she hardly recognized the place that was her home. The Florida that Marjory knew was rapidly disappearing—the rare orchids, magnificent birds, and massive trees disappearing with it.Marjory couldn’t sit back and watch her home be destroyed—she had to do something. Thanks to Marjory, a part of the Everglades became a national park and the first park not created for sightseeing, but for the benefit of animals and plants. Without Marjory, the part of her home that she loved so much would have been destroyed instead of the protected wildlife reserve it has become today.
GOODREADS   /   B&N    /    BOOK DEPOSITORY    /     AMAZON    /     KOBO
BOOK BLINK
* lovely illustrations
* easy to follow and understand
* opens up the Everglades to young readers
MY TIDBITS
I was already taken by this one when I opened the cover and saw the inside. Even before the book begins, colorful birds of all shapes and sizes take flight and swirl around each other. The recount of Marjory's life and accomplishments follows along the same, nature-bound thread and does a wonderful job at introducing young listeners/readers to the Everglades, while sharing the history of an inspiring woman.
The whole thing begins with Marjory and a short recap of her childhood as she grows up in the Everglades. Her joy for the creatures and landscape around her is clear. When she grows older, like most adults, she follows a career and ends up in a more urban setting, but her love for the Everglades and desire to save it from the changing world, draws her back as she fights to keep it thriving and alive.
The illustrations are really what won me over in these pages. Every page is bright and bold, and allows the Everglades to come to life. The creatures and plant life as well as the landscape hold a playfulness, which draws in while keeping the details realistic enough to allow the reader to get a good impression of what the Everglades looks like. It's hard not to want to live there and discover it. On the same side, the illustrations also tell the tale as much on their own as with the text as they follow Marjory growing up, moving to her job, the various problems which threaten the nature, and Marjory's work to keep the landscape safe.
The tale and text is well done, very age appropriate, and easy to understand. It flows nicely and allows listeners to get to know Marjory and sympathize with her efforts as well as understand the dangers the Everglades faced. Not only do the pages teach more about Marjory but also inspire readers and show that a person can make a difference.
And here they are...
The Author...
Sandra Neil Wallace hopes that her stories inspire readers as much as they inspire her. Her most recent book, Between the Lines: How Ernie Barnes Went From the Football Field to the Art Gallery, illustrated by Bryan Collier, received the Orbis Pictus Book Award, was an ALA Notable Book and a Booklist Top 10 Biography for Youth. Her novel, Muckers, was named a Booklist Top 10 Sports Book for Youth. Formerly, Sandra was an ESPN reporter and was the first woman to host an NHL broadcast. She lives in New Hampshire with her family. You can visit her at SandraNeilWallace.com.
The Illustrator...
Rebecca Gibbon is the illustrator of many picture books, including Elizabeth Leads the Way, an ALA Notable Book, and Celebritrees. She lives in England with her family.
on March 29, 2021