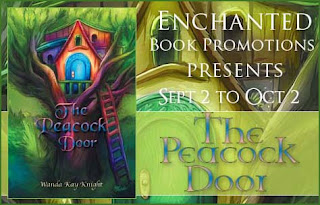 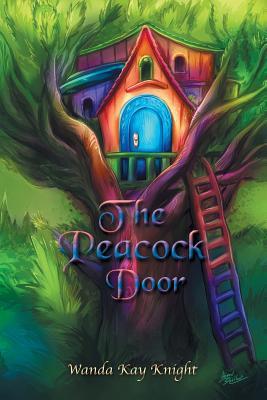 
In a magical tale of adventure, eight cousins sneak through forbidden treehouse doors only to find themselves separated from each other and lost in strange worlds. In their quests to return home, they must unravel mysteries, escape snares and villains, find one another, and search for the elusive Oracle. The Peacock Door is a rich story of camaraderie, courage, and determination with a bit of whimsy sprinkled throughout.

A full moon had risen in the cobalt sky casting a bluish glow over the icy, snow-swept mountainside, illuminating the entire hamlet. Icicles dangled from the steep, high pitched roofs of cottages nestling here and there, jumbled together at odd angles wherever the mountainside allowed. Jagged, ice covered stone steps, cut into the mountainside, curved up and around the icicle laden cottages until finally reaching a summit—a high, flat plateau. And it was on that plateau—high overhead and overshadowing the village—that a Citadel, a snow-covered stone fortress—overwhelming with its massive and imposing presence—rose up out of the mountain as though etched and carved from the rock itself.
They stood exhaling puffs of frosty mist; entranced by the ethereal beauty of their snow laden destination and shocked by the terrible price they must pay to get there. Finally realizing the price for warmth and comfort for the night so they would have an audience with the Oracle tomorrow was a midnight climb up jagged icy stone steps tonight. It was foreboding and frigid; it was ethereal and sublime.
“We can do this,” Eleanor whispered. She slipped over and laid one arm on Ivan’s shoulder and the other on Tilly’s. Addison silently reached down grabbing Brody’s hand—and he let her do it. Claire moved over to stand beside Levi who had taken Esmé back into his own arms. He smiled a grim smile, and then he turned, planting his foot on the first jagged, icy stone step as each of the cousins formed a silent line behind him, breathing in the cold, frosty air, and preparing to follow.