Review: How I Magically Messed Up My Life in 4 Freakin' Days by Megan O'Russell 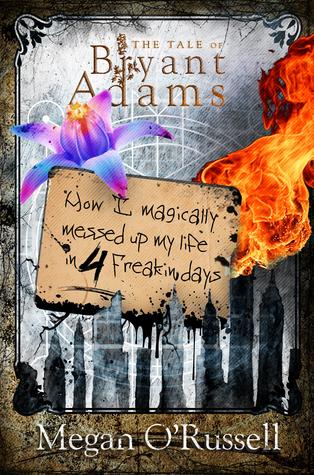 Ever wanted to grow a five-story tall flower in central park? How about fight a deadly battle under the subway tunnels of Manhattan?
Don't worry. I never wanted to either. But if you're ever being chased by ladies made of mist and you have to save the girl with the sparkly eyes you've never had the guts to say actual words to, there's an app for that.
I found a magic cell phone, opened an app I shouldn't have, burned down the set shop for my high school's theatre, and it was all downhill from there. A drag queen seer who lives under a bridge is my only hope for keeping my mom alive, and I think the cops might be after me for destroying my dad's penthouse.
But it gets better! Now I'm stuck being the sidekick to the guy who got me into this mess in the first place. It'll be a miracle if I survive until Monday.

This is a magical, fast-paced, fantasy packed—with a lovely dose of modern day teen—ride.

This hero is and yet isn't your normal guy. He goes to a super average high school in New York, isn't exactly on the popular end of things, and lives with his mom in an okay-ish apartment where they barely make the bills. But, on the other end, his dad is super rich. . .not that he lets anyone know that. Things get weird when he and his best friend find a phone left in the back of a taxi—a magical phone which could destroy New York. Soon, all sorts of creatures are out to get that phone, and they don't give a rip if he lives or dies in the process.

I sat down with this book and read it all the way through with maybe a pause for dinner. It's not a deep read, and not literally beautiful, but rather sits in a modern teen world, where girls and popularity are more important than contemplating the mysteries of the universe. The hero is a nice guy with hidden layers of his own, which make him more complex than he first appears. He gets in over his head and has to ease his way into the entire magic thing. And that's not an easy task but is full of tension and a lovely sprinkle of humor.

While the hero is a little of a misfit, this isn't a tale based on how he learns to kick-butt or fit in. Instead, it's his friends which help pull him through and make for a balanced mix. Even the romance flows at a gentler pace. While there is one and it grows (little bit of hand holding included), there's more to it than boy meets girl and falls head over heels in love. All characters have their own personalities, and it shows in this and every aspect.

Fantasy flies free in this plot, letting all sorts of creatures and magic unfold. It makes the battles interesting, the twists unexpected and the entire thing simply fun. The evil is evil and hard to beat, and there are moments where it's not clear if the hero will come through or not. It's a bit whimsical, but never becomes childish. Especially the younger end of the YA will enjoy this one. . .and those who never lose their desire for simple, magical fun.

Summed up, this is a quick paced, easy read for YA fantasy friends, and I can't wait to see where the story goes next.
on October 07, 2017

Email ThisBlogThis!Share to TwitterShare to FacebookShare to Pinterest
Labels: How I Magically Messed Up My Life In 4 Freakin' Days, Megan O'Russell, The Tale of Bryant Adams, YA Urban Fantasy