Review: The King of Average by Gary Schwartz 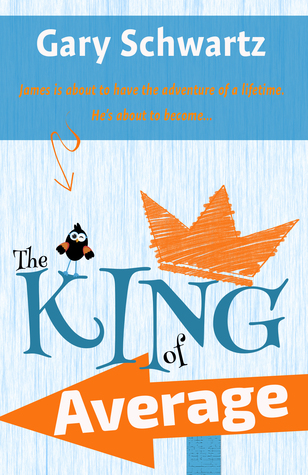 
James isn’t the world’s greatest kid, but he’s not the worst, either: he’s average! When he decides to become the most average kid who ever lived, James is transported to another world where he meets Mayor Culpa, a well-dressed talking Scapegoat who recruits him to become the new King of Average.
He’s joined on his quest by a professional Optimist and his grouchy companion, an equally professional Pessimist. Together, they set out on a journey of self-discovery that leads them all the way from the Sea of Doubt to Mount Impossible, the highest peak in the Unattainable Mountains. When James stumbles into a Shangri-la called Epiphany, he uncovers the secret of who he really is.
Follow James on his hilarious, adventure-packed journey to find self-worth in this heartfelt middle grade novel The King of Average by debut author Gary Schwartz.


Quirky and clever—this adventure is packed full of smart humor, tons of unexpected twists and things to think about along the way.

James is average, as average as average can be. When he runs into a speaking goat, his averageness seems to be endangered until he's swept away to Average itself and is recruited to become the next king. Still, he needs to prove himself truly average-worthy, and this takes him on a journey unlike any he could have ever imagined.

This book offers an amazing mixture of fantasy, adventure and word play with tons of meanings poking underneath. It's got depth, tons of it, and packages all the philosophy in an entertaining line of whimsical characters and imaginative situations. Every step of James' journey brings him not only through the strange realm but past a stepping stone in his own development and self-recognition.

The first pages introduce James as a super average boy. It's not shown but directly, without shame, stated. Interestingly enough, the statements that he's average don't really match with his daily life, which is, in many ways, not average. He's at school but so 'average' he's invisible. He's so 'average' he has no friends. And his life is so 'average' that his mother is—simply said—a massive jerk and doesn't love him much at all. The first pages came across as forcing a mold into readers' heads  which may very well be a subtle set-up and thinking point. Because this book packs a ton of those. Either way, too little time is spent on James' 'average' life before the Mayor (speaking goat) and the quirky adventure begins, and that is too bad.

The rest of the book is a treat. Lots of wonderful situations arise, and it's simply fun to see what comes next. That each new character and each situation is actually a play on words isn't really a secret. Some of it is great for kids and will have them thinking; other moments will probably go over their heads. The vocabulary is not 'average', and instead, pushes readers to broaden their knowledge even if they won't understand every single term. And there is one character who speaks phrases of French, which is lovely and especially interesting for kids. However, more translations might have been helpful at times.

The odd adventure is exactly what readers will love and opens the door to all sorts of possibilities. It's not only fun but offers tons of topics to think about—even for adults.