Review: The Song of Seven by Tonke Dragt, Translated by Laura Watkinson 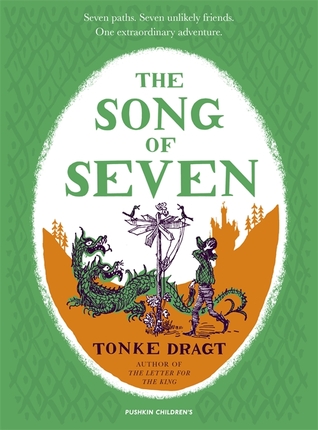 At the end of every schoolday, new teacher Mr Van der Steg entertains his pupils with tall tales of incredible events, which he claims really happened to him - involving hungry lions and haunted castles, shipwrecks and desert islands. One day, when he can't think of anything suitably exciting to tell them, he invents a story about a very important letter which he's expecting that evening, with news of a perilous mission. Evening arrives and so, to his surprise, does an enigmatic letter...

And so Mr Van der Steg is drawn into a real-life adventure, featuring a grumpy coachman, a sinister uncle, eccentric ancestors, a hidden treasure, an ancient prophecy and Geert-Jan, a young boy who is being kept prisoner in the mysterious House of Stairs. Although the treasure rightfully belongs to Geert-Jan, his uncle is determined to seize it for himself. As Mr Van der Steg, with the help of his pupils, sets out to rescue the boy, he becomes more and more entangled with the strange history of the Seven Ways, the House of Stairs and the powerful Conspiracy of Seven.

Warwick Prize for Women in Translation Nominee for Longlist (2017)

This is an English translation of a well-known Dutch tale, one that was even made into a television show.

Mr. Van der Steg is a teacher, who loves to tell adventurous tales to his pupils the last minutes of school—something the pupils enjoy as well. When he announces one day that he's waiting for a letter, said letter is suddenly swept to him in a storm and signed Gr...Gr. He's sure it's a practical joke thought out by some students, but when a carriage arrives to take him to the mysterious Gr...Gr..., the mysterious tale begins.

I have not read the original Dutch version nor have I seen the television version, and knew nothing of this particular tale.

Different cultures have a different way of telling stories (especially when it's during an earlier decade). The main character of this one is a teacher in his mid-twenties, who has a couple of personalities quirks which are sure to grab young readers' interest. He finds himself in an adventure, where many things are odd and others come across as pure fantasy. Strange things lurk around every bend—mysterious coaches, haunted pubs, magicians and a secret treasure—and each element accompanies an even stranger side character. It has quirks, oddities, and a lovely dose of fun which pulls into an imaginary yet real life world. It's exactly the kind of adventure kids can devour.

The writing is whimsical but, coming from an earlier time, does carry a more traditional feel. Some terms won't be familiar, but it's not enough to let the reader fall out of the story. This is told from an adult's—albeit an interesting ones—point of view, which, combined with the vocabulary, might scare off more reluctant readers if they were to read this one their own.

A wonderful mystery unfolds, which is so wrapped up in the odd happenings, that the clues and truth is hard to guess or find. It's fun to see what will happen next, and there's a nice level of tension the whole way through. As is with these tales, the end truth roots in reality and most of the fantasy elements shed their magic. But there's still a dust of possibility left behind, which allows dreams to fly.

As a translation to introduce English speaking kids to tales from other cultures, this is a well-done book and will draw readers in.

Email ThisBlogThis!Share to TwitterShare to FacebookShare to Pinterest
Labels: Children Literature from the Netherlands, Laura Watkinson, The Song of Seven, Tonke Dragt