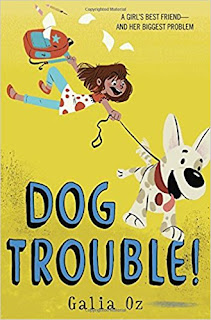 Readers who have graduated from Junie B. Jones and Ivy & Bean will fall head over heels for feisty Julie and her troublesome new dog.

Julie has only had her dog for two weeks, but she is already causing all sorts of problems. For starters, she is missing! Julie suspects the school bully Danny must be behind it. But it will take some detective work, the help of Julie’s friends, and maybe even her munchkin twin brothers to bring her new pet home.

Wonderfully sassy and endlessly entertaining, the escapades of Julie and her dog are just beginning!

Julie’s adventures have sold across the globe and been translated into five languages. Popular filmmaker and children’s author Galia Oz effortlessly captures the love of a girl and her dog.

"A funny exploration of schoolyard controversy and resolution.” –Kirkus Reviews

"Will resonate with readers and have them waiting for more installments.” –Booklist


Welcome to Bookworm for Kids, Galia! What an interesting background you have.

Did studying film and television help strengthen your writing skills?

Of course, studying film was a huge advantage, but it was the practical work – directing four documentary films for television – that was truly significant. As a documentary director, I had to become a storyteller; Every decision, even such as where to place the camera, can significantly affect the plot. The editing process is a good lesson for every writer: It taught me how dramatic the connection between opposite elements can be, and how to cut at the right moment, and especially the power of minimalism.

Dog Trouble has quite an interesting background as well. It’s an award winning series that was published in , and and ended up in the by Crown Books (Random House). Was that a shock that one of the major publishers accepted your book and what do you believe they saw in your book that made them want it?

Random House's choice to publish the Dog Trouble series was a great honor for me, and I am grateful to my editor Phoebe Yeh for trusting in a writer that no one has ever heard of in the States. I can only hope that she found in the book the same qualities critiques on the other side of the globe did: joy of life, honesty, and the sense that the text speaks directly to the child's soul and not over his head. And humor, of course! How amazing it is that humor is not always lost in translation.

Your series is based around dogs. Do you have any?

Of course, I have a 17-year-old dog who now has trouble getting up the stairs, and everyone in the house is crazy about him. My kids who are now in their early twenties come to visit and still cuddle him. He was always there for them, in their childhood. What a privilege it is for a child to grow up in a house with a dog. A dog is a teacher of love and empathy. I also have a cat. But cats teach you other things about life…

Which book in the series do you consider the best?

The fifth and final book in the series, The Great Lemon Robbery is in my opinion the best, and is also closest to my heart in terms of the themes it deals with. But it has yet to be published in the States.

Will there be more in the series in the future?

The Dog Trouble story of a group of children and a dog told from the perspective of Julie, its central character, has come to an end. But a few months ago, a new book of mine was published in . It tells the story of Mikey, a child growing up in a less than desirable home situation who tries to save himself through friendship with a girl from a very different background. He isn’t much of a talker and has behavioral problems, and she, on the other hand, is eloquent and reads books, and on the surface they share little in common. By the way, in this book dogs are also given a place of honor. 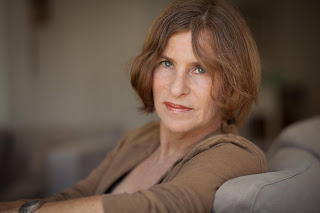 Galia Oz was born in Kibbutz Hulda, Israel, in 1964. She studied film and Television in Tel Aviv University 1984-87.

Her award winning series of 5 books titled DOG TROUBLE was published in France, Spain and Brazil – and recently in the US by CROWN BOOKS Random House. The series is a steady seller in Israel for over 10 years (selling over 150,000 copies).

Over the years, Galia Oz has been meeting thousands of readers in Israeli elementary schools, and taught creative writing and classic children's literature to kids in public libraries.

Galia Oz is married and has two kids, a dog and a cat, and they all live in Ramat Hasharon, just outside Tel-Aviv.