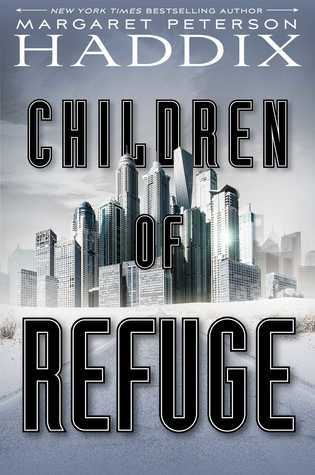 After Edwy is smuggled off to Refuge City to stay with his brother and sister, Rosi, Bobo, and Cana are stuck alone—and in danger—in Cursed Town in the thrilling follow-up to Children of Exile from New York Times bestselling author, Margaret Peterson Haddix.
It’s been barely a day since Edwy left Fredtown to be with his parents and, already, he is being sent away. He’s smuggled off to boarding school in Refuge City, where he will be with his brother and sister, who don’t even like him very much. The boarding school is nothing like the school that he knew, there’s no one around looking up to him now, and he’s still not allowed to ask questions!
Alone and confused, Edwy seeks out other children brought back from Fredtown and soon discovers that Rosi and the others—still stuck in the Cursed Town—might be in danger. Can Edwy find his way back to his friends before it’s too late?

With thrilling moments, unexpected surprises and cleverly placed words for thought, this is a science fiction must read for kids.

Edwy has just met his parents and, less than twenty-four hours later, is already being smuggled off to live in Refuge City to attend a boarding school with the two siblings he's never met. But nothing is as he thought it'd be. Learning that his friend, Rosi and the other children who are still in Cursed Town are in trouble, he needs to find a way to help them before it's too late.

This book takes off where the first one in the series left off. Since the background information is needed before diving into this second book, the series should be read in order.

From the very first page, the action grabs and pulls in. Edwy is immediately snatched up and taken down a mysterious tunnel—and not in a gentle manner. He has no clue what's happening, only that his hopes of family and stability are again blown away. The reader feels for him and the tension shoots high even before the adventure really begins. And this pacing holds the whole way through.

Every page introduces something new, not only from the action side but also in other aspects. Edwy finds himself constantly comparing his past life with that from his time with the Freds. Refuge City is not only different in the scenery, people and politics , but even basic attitudes about life and relationships clash with what he's known so far. He claims to hate the Freds, but he often compares their ideals to those found in the more self-centered life of Refuge City. This offers a lot of food for thought, especially when the history behind the cities and his parents are revealed.

This is a great continuation to an exciting series, and I can't wait to see where it will go next.

Margaret Peterson Haddix is the author of many critically and popularly acclaimed YA and middle grade novels, including Children of Exile series, The Missing series, the Under Their Skin series, and the Shadow Children series. A graduate of Miami University (of Ohio), she worked for several years as a reporter for The Indianapolis News. She also taught at the Danville (Illinois) Area Community College. She lives with her family in Columbus, Ohio. Visit her at HaddixBooks.com.