Happy Book Birthday, Hair In All The Wrong Places 2 by Andrew Buckley and an Interview! 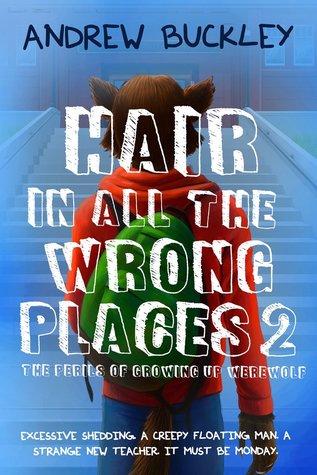 Being a werewolf is no picnic. Colin’s constantly hungry, spends a ton of time shaving, and fights to keep his emotions in check to avoid turning into a giant, drooling, hairy, smelly, howling wolf. But Colin's not the only creature hanging around the town of Elkwood. Vampires, zombies, goblins, ogres, and other questionable visitors and their various shenanigans have got everyone on edge.
Colin just wants to live a normal life, date, and get his homework done on time. But the town of Elkwood needs him. So when a secret government organization asks for his help, will he be able to control the animal inside, or will he give in to the perils of growing up werewolf?

Young fans of werewolves, witches, vampires, demons and all sorts of other fantastical creatures will dive into these pages and be howling for delight all the way to the last page.

Colin is a teenager. If that wasn't hard enough to deal with, he happens to be a werewolf too. Luckily, he lives in a town where magical creatures can mix with 'normals' and lead a somewhat peaceful life. That is, until classrooms explode, strange men with evil eyes appear and killer werewolves haunt the forest. Now, Colin not only has to survive algebra, he has to figure out what danger is about to destroy the town and keep his inner werewolf from controlling him.

This is the second book in the series, and although I'd highly recommend reading the first one, there is enough background information to sink into this book without reading book one.

Colin is a fairly normal guy. He's level-headed, pretty mature in his decision making but still a teen, which sometimes means getting into more trouble than he'd hoped. He's settled pretty well into his new existence as a werewolf and enjoys a little more popularity at school since his adventures in book one. But he still is awkward and doesn't really fit in. In other words, he's a pretty average teen and easy to sympathize with and like.

Although Colin has some fairly impressive werewolf powers and gets to show off in several scenes, this is also a story of friendship and working together. Colin takes the lead. . .somewhat hesitantly. . .but it's the support from those around him which help him pull through. But even this doesn't always work smoothly. Every character has their own quirks, and not all of them are ready to help him. Despite all of the magic and fantasy, the relationships and dialogue between the characters stays realistic and makes the story feel like it could happen in any school—if there was magic, that is.

The pacing holds steady the entire way through, making this a read which is hard to set down until the very last page. There are layers of mystery, and although some things are easy to predict, others come as a complete surprise. It's not a deep read but weaves a constant flow of humor into the action. Even the romance stays light and never overshadows the main plot or fun. The only disappointment to this tale is that it does have a last page. But luckily, there will be more to come.

Despite all of the hectic the last few days and a trip to GeekGirlCon as well as conducting a workshop and joining a discussion panel, Andrew still found the time to sit down and answer some questions for us. Thanks a ton, Andrew!

So without further adieu, here we go. . .


After reading up on you—*aehm* never stalking—I discovered that you've got quite a bit going on. You co-host a podcast, write novels under two names, and are an acquisitions editor for Curiosity Quills Press. Where do you find the time to get it all done?

Firstly, I’ve always wanted a stalker, so thank you :) Time does seem to constantly be in short supply these days. Many a time I’ve wished for a clone or a time machine, but neither have come to pass. My attempts at a clone were woefully miscalculated and I only tried turning the toaster into a time machine once before my wife said I was no longer allowed to do that. I’m a fairly determined and persistent person and despite having a flair for procrastination, I’m actually quite disciplined. My family is very understanding and supportive of my writing and everything that comes along with it, so I just make all the pieces fit the best I can. Sometimes it works, and sometimes the toaster explodes.

2) HAIR IN ALL THE WRONG PLACES was your first dive into fiction for the young adult audience. What inspired you to take that plunge?

I want to say it’s because I wanted to speak into young minds and inspire imagination and creativity, but the real answer is a little more boring. A lot of publishers are looking for MG/YA/Adult crossovers because it speaks to a larger audience. A 10 year old is unlikely to read an adult book but a 40 year old could and would definitely read a book written for a ten year old. That was part of my decision. The other half was influenced by my own kids who are still years away from being able to read my adult titles. I wanted to write something that they could read, and voila! Hair in All the Wrong Places :)

3) What would you rather eat worms than do?

I’m saying this because it just came up during GeekGirlCon: I would rather eat worms than watch the movie adaptation of ‘Into the Woods’ again. That’s two hours of life I can never get back, and this is coming from someone who LOVES fairy tales and musicals. There was just so much of them going into the woods, and singing about going into the woods, and how once they were out of the woods they’d like to go back into them again, all the while singing about said woods. Pass the worms.

4) What is your favorite part about writing?

I still love the aspect of creating new worlds and characters. It’s always such a thrill to come up with a new concept, to introduce new character to each other, and to build out the story. Writing for younger audiences also opened up a whole new world for me as an author. I now spend a large part of the year visiting schools and classrooms, speaking about being an author, and presenting storytelling workshops. It’s not something I’d ever really considered before, but it’s something I’m really enjoying.

5) What are your favorite books to grab up and devour?

The Hitchhiker’s Guide to the Galaxy is my favourite book of all time. I’ve read it multiple times and it influenced me heavily in becoming an author. I’ve also read Lord of the Rings multiple times (such an amazing example of world building), and I’m currently working my way through the original James Bond series of novels by Ian Fleming.

6) What book are you reading right now?

7) What was your biggest wish as a child?

I went through several big wishes . . . We lost our dog when I was ten and I remember wishing for him back. For a while, I wished I was a werewolf (coincidence?). I wished I could talk to girls without turning the same colour as Superman’s underwear. At least one of these came true ;)

Andrew Buckley attended the Vancouver Film School’s Writing for Film and Television program. He pitched and developed several screenplay projects for film and television before completing his first two novels, DEATH, THE DEVIL AND THE GOLDFISH and STILTSKIN, both published by Curiosity Quills Press. Andrew also writes under the pen name 'Jane D. Everly' for his HAVELOCK series of novels.
His foray into writing for a younger audience resulted in the HAIR IN ALL THE WRONG PLACES series of books, published by Month9Books, part of the Georgia McBride Media Group.
Andrew also co-hosts a geek movie podcast, is working on several new novels, has a stunning amount of other ideas, and is currently attempting to bend time and space to allow for more hours in the day. He now lives happily in the Okanagan Valley, BC with one beautiful wife, three kids, one cat, one needy dog, and a multitude of characters that live comfortably inside of his mind.
Andrew is represented by Mark Gottlieb at the Trident Media Group.

Email ThisBlogThis!Share to TwitterShare to FacebookShare to Pinterest
Labels: Andrew Buckley, Hair in All the Wrong Places 2, Teenage Werewolf, The Perils of Growing Up Werewolf, YA Paranormal