Mom and Dad's Day with a Review: Esteemed Vampire Cat by Tyrolin Puxty


Today, it's Mom and Dad's day here on Bookworm for Kids, which means that I've pulled out a book, which is not really intended for the younger readers, but for the parents instead. Yep, even parents need their reads. This one, however, is appropriate for the YA audience. (there are some bloody-ish scenes but portrayed in a light way and definitely nothing more than many YA books hold). 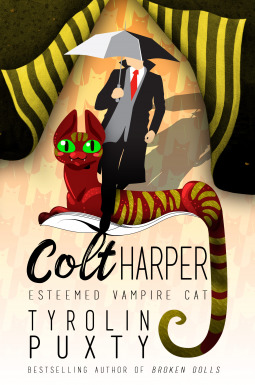 
Colt Harper hates it when you pat a cat the wrong way, or when you upload their faux pas to YouTube. In fact, he'll probably kill you for it.
As a self-proclaimed master vampire cat, Colt never imagined he'd be sent to community service at a revolting community theater. And for what? Killing humans who don't buy the expensive brand of cat food? Talk about unfair.
Still, working with a nervous werewolf and a monster addicted to tickling wasn't on his to-do list.
What's worse, is he's falling for a human. Sure, she has green eyes. Sure, she fosters stray cats. But she's still a disgusting human.
So why is he risking his own life to save her from the chasers?


Over the top characters, a ridiculous plot and, at the center of it all, an arrogant cat with tons of wit and brains—a fantastically, hilarious read!

Colt Harper is one of a kind, mostly because his kind is nearly extinct. As the last surviving vampire cat, it's Colt's inborn duty to kill all humans which have ever offended, hurt or hated a cat. Unfortunately, killing humans is no longer allowed—a habit Colt really can't break—placing him in community service. Again. That this community service turns out to involve a whole lot more, and he's soon running to save his and his new found friends' (in the broadest sense of the term) lives.

Tyrolin Puxty has a treasure chest of an imagination and lets it flow freely. The characters are all gems, each harboring very distinct attitudes and quirks, and each as funny as can be. Colt Harper is as complex as a ancient cat should be, and doesn't even understand himself at times. But he's clever, he's witty, and he manages to force himself to handle anything thrown his way—even disgusting humans. His attempt to maintain a high level of esteem always runs up against road blocks, and it's a sheer delight to watch out he manages to slink his way around through them and even come out on top. Usually.

The monsters go past the well-versed range and hit upon less known ones, which kill people through tickling or force them into nightmare states. There's even the chance that a monster be turned into a pair of red running legs—something to be avoided at all costs. It's not a calm tale, but bloody and filled with death. There's action, skin-of-the-teeth escapes and exciting fight scenes. Don't forget the mystery and plenty of very unexpected twists and turns, and it all gets thrown together with a huge amount of spicy wit and fun. In other words, it's not the usual paranormal read and takes serious with an edge of quirky oddness. And that's exactly what makes it such an amazing read.

Summed up, this is for all those paranormal (especially vampire cat) fans who are ready to plunge into something completely different and new.