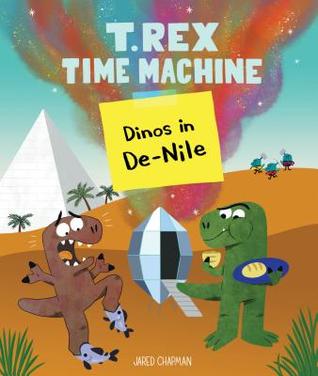 
Two T. Rexes are whisked away by their time machine to ancient Egypt, where King Tut mistakes them for Sobek, god of the Nile. They are treated to glorious feasts and magnificent tours. But when the aliens land—they're in the middle of constructing the pyramids—and expose the supposed gods as mere dinosaurs, everyone's mad. Will the dinosaurs escape? This laugh-out-loud romp through time and space is perfect for storytime, bedtime, read-alouds, and guaranteed giggles!

Zanny silliness and quirky fun make these dinosaurs a pair to love and laugh with as the zip to Egypt and rub elbows with a Tut, which might not be so historically correct.

The two dinosaurs have landed with their time machine in Egypt. They're a bit confused, to say the least, but they meet Tut, who quickly informs them they are actually gods of the Nile and authors of his favorite comics. He takes them on his ship to show them more of Egypt and soon run into strange creatures...aliens. And that's when things start souring up.

Do not expect anything serious in these pages, and that's exactly what my son loved about it. These dinosaurs talk, are intelligent, and step from one quirky problem into the next. While there is a touch of history...kind of...the Sphinx and other buildings take on new meaning. And Egyptian life is not what you expect. The addition of aliens definitely caused an eyebrow raise, but hey, everything is possible, I guess. It's brings giggles and snorts and will need to be read more than once. And for those who are ready and willing, it's part of an entire series (this book being the second), which promises tons of silly fun.

Jared Chapman is the author and illustrator of many books for young readers, including Vegetables in Underwear, Fruits in Suits, and T. Rex Time Machine. He lives in Texas with his family.