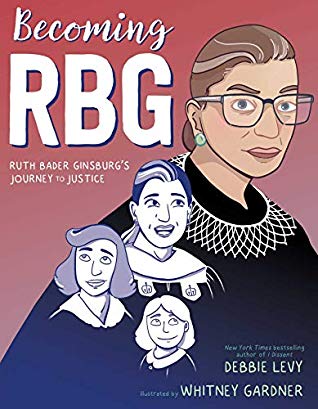 Supreme Court justice Ruth Bader Ginsburg is a modern feminist icon—a leader in the fight for equal treatment of girls and women in society and the workplace. She blazed trails to the peaks of the male-centric worlds of education and law, where women had rarely risen before.

Ruth Bader Ginsburg has often said that true and lasting change in society and law is accomplished slowly, one step at a time. This is how she has evolved, too. Step by step, the shy little girl became a child who questioned unfairness, who became a student who persisted despite obstacles, who became an advocate who resisted injustice, who became a judge who revered the rule of law, who became…RBG.

The life of an amazing woman and Supreme Court Justice, Ruth Bader Ginsburg, comes to life in this easy to read, graphic novel.

Step by step, Ruth Bader Ginsburg goes from a five-year-old Kindergartner to a Supreme Court Justice. Broken up into short chapters, each section covers a segment of her life, which influenced how she thought and led her down the difficult path of working her way up the ladder of life. The text is kept simple enough for middle graders to understand, and the accompanying graphics add to the historical settings and make the events easier to understand. At the end of the book, there is a detailed timeline, a bibliography, and source notes.

The idea of combining this biography with the elements of a graphic novel is refreshing. Still— although I hate to say it—I doubt many middle graders are willing to dive into a biography like this on their own free will. This graphic novel form definitely offers a change from the 'boring' dribble of pure text and a few pictures. Plus, there's a little more 'action' involved, which give off a more true to life story atmosphere—making it easier for kids to connect with—than the usual factual dryness. There's even a touch of Ruth Bader Ginsburg's humor thrown in. Like many biographies, it does stick to the challenges this woman faced and concentrates heavily on her older years (after middle school). In other words, it isn't a read most kids would probably want to dive into too much during their free time, but it's definitely a great addition for classrooms, home-schoolers and those who want to open kids up to the topic and the wonderful achievements of Ruth Bader Ginsburg.

The Author...
Debbie Levy  is the award-winning author of many books of nonfiction and fiction, including the New York Times bestseller I Dissent, This Promise of Change, The Year of Goodbyes, and the young adult novel Imperfect Spiral. She lives in Maryland with her husband. They have two grown sons.


The Illustrator...
Whitney Gardner is an author, illustrator, and coffee addict. Originally from New York, she studied design and worked as an art teacher and school librarian before moving to Victoria, British Columbia, where she lives by the Salish Sea with her husband and two pugs. In the rare moment Whitney isn't writing or drawing, she's likely to be reading comics, knitting or roasting coffee. Her books include the YA novels You're Welcome, Universe, Chaotic Good; and the middle grade graphic novel Fake Blood.