Review: Pokko and the Drum by Matthew Forsythe 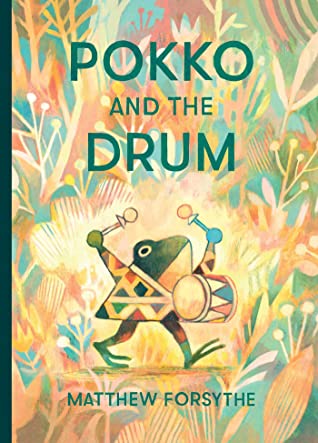 
The biggest mistake Pokko’s parents ever made was giving her the drum. When Pokko takes the drum deep into the forest it is so quiet, so very quiet that Pokko decides to play. And before she knows it she is joined by a band of animals —first the raccoon, then the rabbit, then the wolf—and soon the entire forest is following her. Will Pokko hear her father’s voice when he calls her home? Pokko and the Drum is a story about art, persistence, and a family of frogs living in a mushroom.

An irritating hobby unveils itself as a huge success and draws like minded together to raise fun for everyone.

Pokko is a little frog, whose parents have given him many presents, which proved to be mistakes. But the present they regretted giving him the most was a drum. When conversation became impossible to due to the noise, the send him outside, but warn him not to draw too much attention to their humble home. Off Pokko goes and, at first, tries to enjoy the quiet, but soon he misses some noise. So he plays his drum. When a new noise joins in, he notices that a raccoon is now tagging along, playing its instrument. And the adventure begins.

Firstly, I love the illustrations in this book. They are vibrant and as full of life as the music Pokko seems to play. It's a delight to flip through these and watch as he heads into the forest and meets more and more friends.

Although the story centers around Pokko, it's not actually his personality that shines. Rather, the story starts off with a bit of humor, which will guarantee more than a giggle or two. When Pokko is sent outside to play (something many listeners will probably sympathize with), it's fun to watch as he's joined by other creatures and their instruments. There are a couple surprises packed in, which give the story an unexpected twist or two. The excitement and passion of the other animals radiates from the pages, and the ending wraps things up in a wonderful way. It's a fun read.

Matthew Forsythe is the former lead designer for Adventure Time and an award-winning author-illustrator of children's books and comics. His illustrations have appeared in many publications including The Wall street Journal and New York Times. He lives in Canada.

Email ThisBlogThis!Share to TwitterShare to FacebookShare to Pinterest
Labels: Matthew Forsythe, Pokko and the Drum