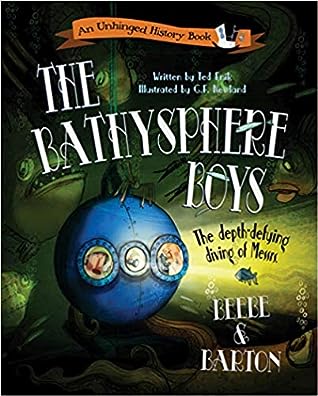 THE BATHYSPHERE BOYS
The Depth-Defying Diving of Messrs. Beebe & Barton
by Ted Enik
Illustrated by GF Newland
Schiffer Publishing
48 pages
ages 5 and up

The true story of the invention, disasters, and adventures of the first bathysphere--a small, cramped, bare-bones spherical deep-sea submersible that set the world record for deepest dive in 1934. Explorer William Beebe and engineering grad student Otis Barton teamed up despite mismatched personalities and disagreements and changed deep-sea exploration forever. Told through engaging rhyme, this playfully illustrated addition to the Unhinged History series follows their journey from frustrated inventors to international celebrities. The tiny bathysphere was miserable to be in, with terrible lighting, little room to move, stale air, and minuscule portholes--but still the scientist-adventurers went far under the waves to experience the mysterious waters as no one ever had. After near calamities and false starts, Beebe and Barton saw, for the very first time, deep-sea creatures in their home environment, broke world records, and made history.

An often overlooked diving and engineering success not only emerges in these pages, but it does so with a whirl of quirky rhyming fun.

Will Beebe had an idea and was soon joined by Otis Barton to build a diving sphere, which should go deeper than any possibility of that time. The Bathysphere was created. But things didn't always run smoothly, but they didn't give up.

Set in rhymes, this book takes a slightly humorous (and yet, serious) twist into Will Beebe and Otis Barton's invention of the Bathysphere. It's definitely quite a quirky ride and can't be read with paying attention. The word play is speedy and hits with a sense of ridiculousness while still sitting on fact and telling the tale of how the two men achieved their goals. It's never boring and raises more than a few eyebrows along the way. In other words, its a refreshing and fun way to bring across a piece of history.

While the poem itself is fast-paced and splashes excitement between the facts, there are several pages of (still entertaining) but more informational diagrams and displays on the last pages. There's also the mention of Gloria Hollister, who collaborated with Beebe and made her own marks in the diving world.

The Author...
As an illustrator, Ted Enik has worked for most of the better-known publishing houses in New York, as well as for the occasional advertising agency, greeting-card house, and pharmaceutical company. He was honored to be tapped to illustrate Eloise in Hollywood and for nearly a decade was an artist for the popular Fancy Nancy “I Can Read”™ series. He recently switched hats and is now happily writing (and rhyming) up a storm.


The Illustrator...
Illustrator/designer G. F. Newland has held a long and ponderous chain of odd jobs over the years, and to pass the time he doodled. Many of these doodles made their way into books published by Scholastic and Hachette, and into galleries and museums around the known world (e.g., Brooklyn).
on November 29, 2019