Review: Parker Looks Up by Parker Curry and Jessica Curry 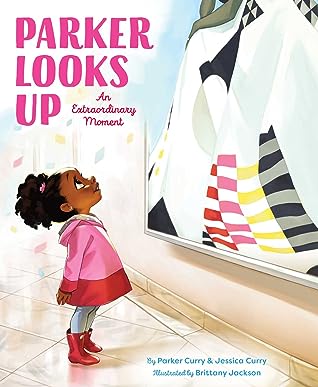 
A New York Times bestseller!
A visit to Washington, DC’s National Portrait Gallery forever alters Parker Curry’s young life when she views First Lady Michelle Obama’s portrait.
When Parker Curry came face-to-face with Amy Sherald’s transcendent portrait of First Lady Michelle Obama at the National Portrait Gallery, she didn’t just see the First Lady of the United States. She saw a queen—one with dynamic self-assurance, regality, beauty, and truth who captured this young girl’s imagination. When a nearby museum-goer snapped a photo of a mesmerized Parker, it became an internet sensation. Inspired by this visit, Parker, and her mother, Jessica Curry, tell the story of a young girl and her family, whose trip to a museum becomes an extraordinary moment, in a moving picture book.
Parker Looks Up follows Parker, along with her baby sister and her mother, and her best friend Gia and Gia’s mother, as they walk the halls of a museum, seeing paintings of everyone and everything from George Washington Carver to Frida Kahlo, exotic flowers to graceful ballerinas. Then, Parker walks by Sherald’s portrait of Michelle Obama…and almost passes it. But she stops...and looks up!
Parker saw the possibility and promise, the hopes and dreams of herself in this powerful painting of Michelle Obama. An everyday moment became an extraordinary one…that continues to resonate its power, inspiration, and indelible impact. Because, as Jessica Curry said, “anything is possible regardless of race, class, or gender.”

Parker is a girl full of life, who loves to dance. When her mother takes her to the museum, she discovers all sorts of wonderful paintings with her friend and sister. They have so much fun. Just when mother tells them its time to leave, Parker sees a portrait which makes her stop and take it in as it effects her in ways she'd never expect.

I love the energy Parker has. She's such a cute girl packed with life. It's delightful to follow her as she puts on her boots and stomps to the museum with her sister. Young listeners will feel a connection to her right away. The museum is presented as a place full of adventure and discovery. Several artworks, which can be found at the National Portrait Gallery and Smithsonian American Art Museum, are presented...but not in a boring way. Each is presented as if it comes off of the page, giving it a sense of fun and excitement. There's a short description of each one in the back of the book as well.

There are two messages in these pages. The first does a terrific job at showing how exciting an art museum can be. Paintings can be a joy to discover and there are some that will leave an impression. The second highlights Michelle Obama and shows how her portrait affected little Parker using single word thoughts to let the emotions and impressions flow. At the end of the book, there is a note from the artist of the painting. I, personally, would have liked, at least, a short biography of Michelle Obama, since the book does center around her and young listeners won't necessarily know who she is, especially as time goes on.

The illustrations are as lively as Parker herself and do a terrific job at bringing across the artwork in the museum. They make this book a joy to read.

The Authors...
Parker Curry is four years old, and is a full-time Pre-K 4 student. She is a precocious and talkative with a love for ballet and books. She lives with her mother, father, younger sister and baby brother in Washington DC.

Jessica (Curry) Morton is an author and writer whose work has been featured in the New York Times, as well as a work-at-home full-time mother to two little girls, Parker and Ava, and their baby brother, Cash. Her blog, Happy Mama, Happy Babies, is a mother hood and lifestyle blog that chronicles their adventures. She and her family line in Washington, DC.


The Illustrator...
Brittany Jackson (Bea for short) is and award-winning illustrator who attended the College for Creative Studies and is the grand prize winner and returned alumni of I. Ron Hubbard's Illustrator of the Future Award of 2007. Bea has worked in freelance as a character and outfit designer for various social networking and gaming platforms for more than eight years, though she is most publicly known in publishing as the illustrator for the popular children's book Hair Like Mine. She lives in Detroit, Michigan.
on November 27, 2019