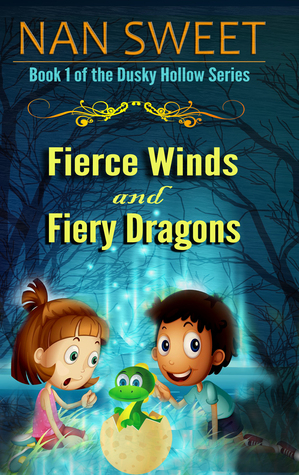 
Ivy and Carrie love their new classroom even if the new teacher is a little strange. When Mrs. Huffity asks for volunteers to care for an egg, Ivy doesn’t budge. She’s had a few scary dreams about that egg and wants nothing to do with it.
But when trouble comes, Ivy defends the egg. In her desire to save the baby that hatches, Ivy is tossed into the middle of an adventure. She discovers more than she ever wanted to know about fierce winds and fiery dragons.

With easy to relate to characters, this is a  cute dive into fantasy and touches upon a creature many young readers would probably like to hatch themselves.

Ivy and Carrie are great friends, but their lives are, in many ways, so different. While one has a life which runs smoothly, the other's parents are facing divorce. Ivy is then plagued with nightmares...ones that could relate to the new class project. So when Ivy has the chance to take a day to care for a dragon egg, she turns it down. Still, life has other plans.

I enjoyed the balance between a familiar setting and character lives with the toss in of something as fantastical as a dragon. Ivy and Carrie start out as very usual girls in a very usual classroom setting with very usual problems. Both girls have good hearts, and both struggle with their own problems. Add in the normal classroom drama, and it's something young readers will connect to right away.

The dragon egg settles in with so much finesse...as if it's a natural part of any classroom activity. But, of course, that's when the real adventure starts. The pacing holds smoothly until the last page and keeps readers in the pages. It's a fun tale in so many ways, and one kids are sure to enjoy.
on November 18, 2019