Review: Secrets of the Under-Under World by PS Whatever 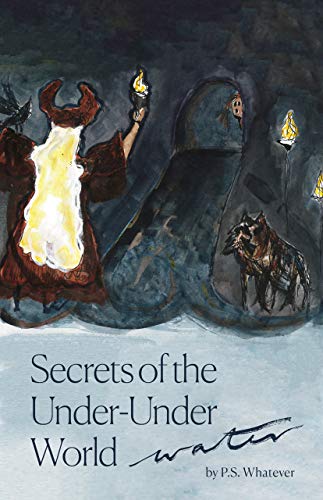 SECRETS OF THE UNDER-UNDER WORLD
by PS Whatever
Middle Grade Fantasy
144 pages
ages 8 to 12
Beautifully illustrated in full-color, Sam is a modern Alice in Wonderland, who must face wolves, battle giants, and stop an evil plot to steal the world’s water.Sam is a spunky girl with the weight of two worlds on her shoulders: the world above ground and the magical Under-Under World.The books starts with Sam stuck on the roof. At night. In the rain. And she’s angry—and not just about being locked out of her house. She’s angry because her parents are dead. She’s angry because she has to scrounge for food and wear stupid old clothes and borrow other kids’ books. Dear old Aunt C is no help, at least not since she began to lose her marbles. Neither is brother Darby. Nor is Gemini the cat—who only cares about her food bowl.Out on the roof, choking on factory fumes and pelted by golf ball-size raindrops, Sam stomps her feet, slips, and falls—breaking through the surface of the earth into the unknown. She lands in the Under-Under World, a lovely and mystical place ruled by The Great Hildinkski, a wise and ancient woman – the last descendent of a lost civilization.But Sam’s troubles multiply as she slips into the depths of this new world. How can she take care of old Aunt C from down here? How can she make things happen in a place where all the rules are different—where a boy talks to fish, mist cuts through fire, and castle locks spring open with a certain kind of touch? To make things worse, Sam is accused of stealing the colony’s sun.Surely, The Great Hildinski can help her find her way back home—but she wants something from Sam first. Something that Sam can’t give because the real thief has it. And the real thief is getting more aggressive—and dangerous—by the minute.Then Darby and Gemini appear—expecting her to help them find their way back home. Things get even worse as Sam stumbles on a sinister plot to steal the colony’s water—a plot that could destroy both Under-Under and the world above. She has to find a way to protect the water, for everyone’s sake. But how?A modern Alice in Wonderland, this is the story of a girl who must face wolves, battle giants, and stop an evil plot to steal the world’s water. Only when she learns three vital but mysterious lessons can she save the water, save herself and find her way back home.
GOODREADS   /    AMAZON
MY TIDBITS
I love it when I run across a little gem, which comes out of the more independent end of the publishing world. And this book is exactly that.
Sam and her brother have lost both parents and now live with their aunt. Unfortunately, their lives aren't nearly as nice as they once were. Upset with her circumstances, Sam escapes to the roof but accidentally gets trapped there. When a storm leads to her falling through a hole, she finds herself in the Under-Under World below the Earth's outer crust. The kingdom is lead by the Great Hildinski and is suffering thanks to someone stealing the sun. While Sam does her best to find a way back to the surface, she runs across an evil plot and finds herself caught up in an amazing adventure.
I really enjoyed meeting Sam and joining her on this adventure. While it sounds complex, the author weaves an engaging and flowing tale, which holds adventure, emotion and tension...and that all in around 125 pages. There are a few, lovely illustrations here and there, which are always a plus. And this one works well as a read-aloud for story hours as well (although I would recommend it to grades 4 and up).
While the tale keeps the reader wanting to learn more, there are also quite a few messages woven in. Friendship, sibling relationships, learning to appreciate what you have, environmental issues and more are incorporated into the adventure. It makes for an engaging read with more depth than there appears to be. In other words, it does pack quite a bit of goodness in with the fun.
And here she is...

P.S. Whatever lives in Vancouver, Canada and writes under the supervision of her two cats. Under her real name, she has written 24 television episodes of Lost Tales of the Brothers Grimm as well as other works of fiction and non-fiction. She is also a professional corporate writer and marketer.

Why does she write under a pen name? “I was born with one last name and traded it for another when I married,” she explains. “I’ve gathered many nicknames, which I can change into and out of like clothes. I finally realized that I could name myself – at least while writing – so I chose a name that expressed infinite possibilities. Whatever. I can make my way in the world, as the person I want to be, and do whatever makes my heart sing. And so can you.”

Email ThisBlogThis!Share to TwitterShare to FacebookShare to Pinterest
Labels: PS Whatever, Secrets of the Under-Under World