Today's review hits deeper themes and takes a darker, emotional turn. This one, although for teens, does lean a bit toward the controversial side of life. It also takes a open look at the Tourette Syndrome and Obsessive-Compulsive Disorder. This won't be a read for everyone (there are more than a couple triggers), but those who do grab it up will be left with more than just a little food for thought. 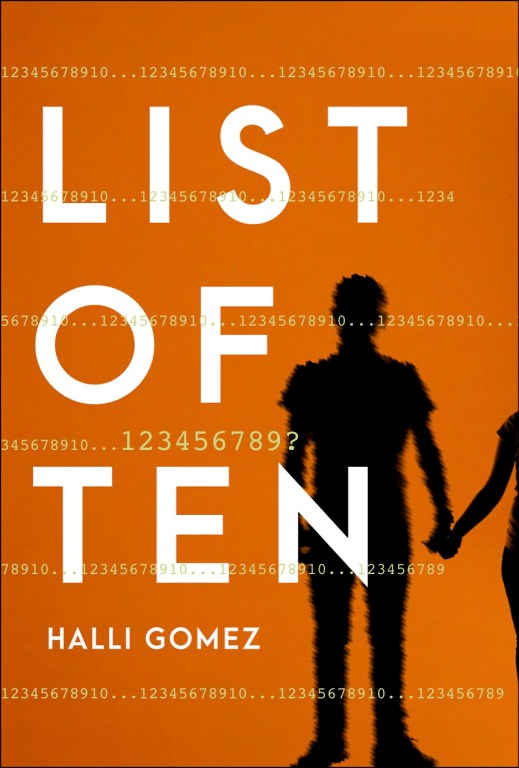 LIST OF TEN
by Halli Gomez
Sterling Teen
YA Contemporary
360 pages
Ten: three little letters, one ordinary number. No big deal, right? But for Troy Hayes, a 16-year-old suffering from Tourette Syndrome and Obsessive-Compulsive Disorder, the number ten dictates his life, forcing him to do everything by its exacting rhythm. Finally, fed up with the daily humiliation, loneliness, and physical pain he endures, Troy writes a list of ten things to do by the tenth anniversary of his diagnosis—culminating in suicide on the actual day. But the process of working his way through the list changes Troy’s life: he becomes friends with Khory, a smart, beautiful classmate who has her own troubled history. Khory unwittingly helps Troy cross off items on his list, moving him ever closer to his grand finale, even as she shows him that life may have more possibilities than he imagined. This is a dark, intense story, but it’s also realistic, hopeful, and deeply authentic.
BOOK DEPOSITORY   /    GOODREADS    /    B&N     /    AMAZON
BOOK BLINK
* open look at Tourette Syndrome and Obsessive-Compulsive Disorder
* darker story with difficult themes
* ends with hope
Triggers:  cutting, suicide, marijuana usage, abandonment
MY TIDBITS
This is a novel, which digs deep, pulls at the gut and heart-strings, and gives a light at the end of a dark tunnel.
Troy is sixteen and was diagnosed with Tourette Syndrome and Obsessive-Compulsive Disorder ten years before. With the tenth anniversary of this diagnosis approaching, he decides to create a list of ten things to complete before that day is achieved. The last on his list will finally mean an end to a life he no longer wants to fight and suffer through. As he starts hacking away at his items, he learns to know several others around him better and develops relationships he didn't think possible...even maybe learns to rediscover himself.
Some books are pure food for thoughts, and this one definitely slides into the category and then some. Troy is a kind guy, who's hard not to like and impossible not to feel for as he struggles through life. The author allows Troy's fight with his syndrome and disorder to come across clearly and with a huge impact. This creates not only a deeper understanding for Troy but also opens readers' eyes to the troubles people have, who suffer these disorders. It carries pain, heart and is a very heavy read on that end.
The author doesn't only let the dark side of Troy's life come through but addresses other problems teens might face through the other characters, and their struggles are by no means less difficult. Many difficult areas are addressed and several will disturb more sensitive readers. But there is light in the darkness. Troy develops wonderful relationships, including with his girlfriend and younger brother. This not only gives much needed reason to hope but also offered dots of sunshine. Even Troy's list does include a few things which lightened the tale and added a touch of humor. This keeps the book from only bogging down and makes Troy more likable as well.
While there are positive moments and a shining light at the end, it is important to mention that this is a darker and heavier tale, which explores Troy's own lack of self-worth and serious struggles of those around him. Topics such as cutting and suicide are mentioned and, for most of the book, Troy is not in a good place. It's a story which leaves an impression on the reader, shows that goodness is out there even when it doesn't seem that way, and helps readers to see some people and their struggles in a new way.
And here she is...
Halli Gomez writes for children and young adults and works at her independent bookstore. She has written several stories with neurodivergent characters including her young adult novel, LIST OF TEN (Sterling, March 2021) When no one is looking, she sock skates through the house and talks to dogs like they are human. When people are looking, she enjoys reading, outdoors, and breaking out of escape rooms with her family. Halli lives in North Carolina with her husband, two boys, and two dogs.
on March 30, 2021