After the long line-up of picture books this week, it's high-time for a middle grade read. And what about something on the spooky side? I've had this one in sights for awhile now and have finally had a chance to get to it. Although I'm not 100% positive, I believe it might be the beginning of a new series (I saw mentions of that here and there but nothing official). And since this one takes place in a theater, I'm now pulling back that imaginary curtain and letting you take a glance at it yourself. 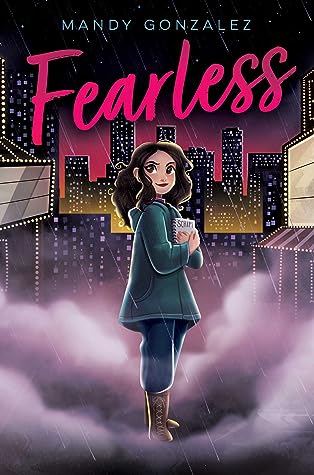 FEARLESS
by Mandy Gonzalez
Aladdin
Middle Grade Contemporary
240 pages
ages 8 to 12
COMING...
APRIL 6th!!!
Better Nate than Ever meets Love Sugar Magic in this spooky middle grade novel from Hamilton and Broadway star Mandy Gonzalez about a group of young thespians who must face the ghost haunting their theater.The Ethel Merman Theater is cursed. No one is sure how or why, but the evidence speaks for itself. Show after show has flopped and the theater is about to close. Enter twelve-year-old Monica Garcia, who has been cast to star in a Broadway musical revival of The Goonies, the theater’s last chance to produce a hit before it shutters its doors for good.The kids in the cast each have their own reasons for wanting to make the show a success, and all eyes in the theater world are on them. Will this show finally break the curse of the Ethel? The kids aren’t quite sure if the curse is even real, but when their first performance doesn’t quite go as planned, it certainly feels that way.Then they realize the ghost light—the light that is always kept on at every theater in order to appease the ghosts—wasn’t lit! When the kids rush to flick the switch back on, they find themselves locked in the theater—but that’s the least of their problems when the ghost of the Ethel makes her debut appearance!Can the cast overcome their fears and reverse the ghost’s curse before opening night so they can save the show—and their dreams?
GOODREADS   /    BOOK DEPOSITORY   /    B&N   /    KOBO    /    AMAZON
BOOK BLINK
* incorporates many facts/aspects of theater
* determination and dreams
* a touch of mystery
MY TIDBITS
A girl's determination meets Broadway in an interesting mix of achieving dreams, theater, and a tiny bit of mystery and sabotage.
Monica's dreams are coming true; she's headed for Broadway as an understudy. Her goal to become a star is sliding closer, and with it the dream of  helping to support her hard working parents and her brother, who has severe medical conditions. But when she reaches the theater in New York, problems arise. Thanks to a curse, the two actresses ahead of her have suffered from an accident or left, leaving her in the leading role with three other kids. When a star is injured as well, she realizes that this might be a real problem, but she still has other things to worry about as her brother suffers from yet another seizure.
The author has done a wonderful job at weaving in all sorts of aspects about theater...from the backstage to props to set-ups and then working in information including historical facts and even some hints at the business end of things. So, theater fans are going to enjoy diving into this one quite a bit. It's a rich setting with tons to enjoy.
Starting out in Monica's school back in California, this tale glides through her first moments in New York with her abuela and right into the theater, where she immediately sees the results of the curse. While I expected a bit more tension, action, and mystery in this one, the story focuses more on Monica and her working through the idea of being on Broadway, her role, and the wishing she could help her family, especially as her younger brother and his suffering causes a constant worry. The curse of the theater does sink in much better during the second half of the book, and Monica does have a lot to deal with on several fronts. It's a nicely done tale and great for kids, who dream of theater themselves.
And here she is... 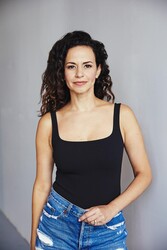 Mandy Gonzalez has thrilled audiences on Broadway, lit up the screen on television, been published in Harvard Business Review, and started a social movement. Currently starring as Angelica Schuyler in Hamilton on Broadway, she also recently appeared in Madam Secretary as recurring character Lucy Knox and is known for originating the role of Nina Rosario in the Tony Award­­–winning show, In the Heights. Mandy’s debut album, Fearless, reached #13 on the iTunes pop charts. Mandy is also an author—having published a widely cited article in the Harvard Business Review on how to overcome one’s fear of public speaking. Most dear to her heart, Mandy is the proud founder of #FearlessSquad—a social media movement for inclusiveness and belonging. The movement connects millions of people around the world, encourages them to be their best selves, and helps them empower each other.
on March 18, 2021