Review: Alina: A Song for the Telling by Malve von Hassell

Today's read takes a more serious turn. Since I don't often get my hands on historical fiction...especially for middle graders...I jumped at the chance to review this one. To make things more interesting, these pages head back into the late 1100's/beg. 1200's. I, honestly, can't remember ever reading a middle grade novel set in that time period. And that with a young girl traveling all the way to the Holy Land. Best of all, this book does include many historical figures.
Excited? I know I am. 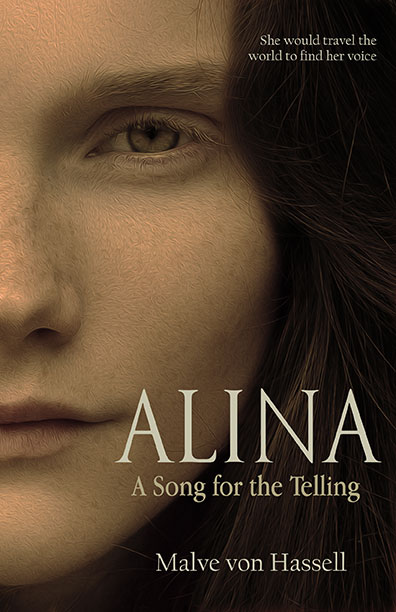 ALINA: A SONG FOR THE TELLING
by Malve von Hassell
BHC Press
Middle Grade Historical
232 pages
ages 9 to 14
Alina: A Song For the Telling is a coming-of-age story of a young woman from Provence in the 12th century. Although written for middle grade/young adult, this timeless and classic tale will be enjoyed by readers of all ages, especially those who enjoy books like Anne of Green Gables or Little Women.

“You should be grateful, my girl. You have no dowry, and I am doing everything I can to get you settled. You are hardly any man’s dream.” Alina’s brother, Milos, pulled his face into a perfect copy of Aunt Marci’s sour expression, primly pursing his mouth. He had got her querulous tone just right.

Maybe Alina’s aunt was right. She could not possibly hope to become a musician, a trobairitz—impoverished as she was and without the status of a good marriage. But Alina refuses to accept the life her aunt wants to impose on her. At the first opportunity that presents itself, Alina and her brother embark on a pilgrimage to the Holy Land to escape from their aunt’s and uncle’s strictures.

Their journey east takes them through the Byzantine Empire all the way to Jerusalem, where Alina discovers her passion and finds her voice.
BOOK DEPOSITORY    /    GOODREADS    /    B&N   /   KOBO   /    AMAZON
BOOK BLINK
* built around historical facts and figures
* strong female character
* sibling bonds
MY TIDBITS
This tale takes a dive into the past with finesse, sibling love, a touch of intrigue, and lots of heart.
After the death of Alina's mother and sister, her father falls into depression and soon commits suicide. When her uncle and aunt move in and take over the estate, both Alina and her brother are seen as problems. Not wanting to be wed off to some old man, Alina agrees to her brother's crazy idea, and soon they find themselves, with the support of their uncle, leaving Europe and on their way to the Holy Land, where the Crusades are underway.
Note: This book is sold as an middle grade read, but I would highly recommend it for young adult. There is a little more sensitive material, and while not graphic, it's not middle grade appropriate. Plus, this book plays more in Alina's head than in action, which shoves it into the upper audience level.
When I found out this one was set in about the 1170's, I was thrilled to get my hands on it. It's been a long time since I've read a novel set in this time period, and definitely not one for this intended age group. Alina and her brother, Milo, are very easy to connect with and understand as their family dies, leaving them at the mercy of a selfish aunt and uncle. Alina's is a very strong character, and while not super risk friendly in general, takes fate into her own hands and makes tough decisions when the need arises. She's a very clever character with a great moral compass and a deep love for her brother.
The historical aspects are done very well, and the author put a lot of love into this one. There's a list at the beginning of the historical figures mentioned in the book with a short description as well as birth and death dates. While some social aspects (ideologies and such) do stray into more modern day thinking, the world is well created and allows the reader to learn more about the time period. And not about the Crusades as much. This one heads more in a general direction, settles in with the royal family in Jerusalem, and peeks more at the political plays and social aspects surrounding this part of life.
There's a lot that happens in the less than 250 pages, since this starts in Europe, continues through the travels to the Holy Land, follows Alina's time in the castle, and ends with her and her brother on their way again. And it reads just as quick. While this made for a one-sitting read that does keep one in the pages, it lacked needed depth. Not only was it hard to feel for any of the characters outside of Alina, but the true richness behind the moments wasn't explored. While I did enjoy this one...and I do recommend it...I believe it would have been an amazing read if pulled out much more. So, things happened which were interesting but it was hard to really sink in.
Still, this is a lovely read, which portrays a different angle of the Crusade period, incorporates real history, and introduces a strong, inspiring girl.
on March 19, 2021

Email ThisBlogThis!Share to TwitterShare to FacebookShare to Pinterest
Labels: Alina: A Song for the Telling, Malve von Hassell