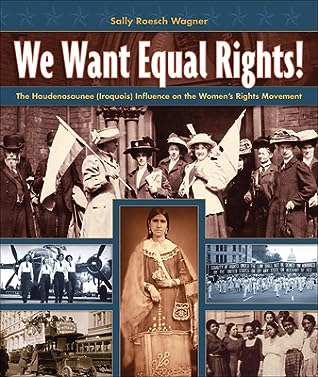 WE WANT EQUAL RIGHTS!
The Haudenosaunee (Iroquois) Influence on the Woman's Rights Movement
by Sally Roesch Wagner
7th Generation
Historical Non-Fiction
48 pages
ages 8 to 12
We Want Equal Rights! is the story of remarkable women who laid the foundation for the modern women's movement and the American Indian nation that proved equality was possible. In 1850, these brave women challenged a culture that believed they were inferior to men. How did they envision such a world? They looked to their neighbors the Haudenosaunee (Iroquois) and saw how women were held in high regard, with even greater rights than men.At that time in the United States, a woman was considered subservient to her husband, who gained all his wife's wealth upon marriage. Women had no claim to their children and were considered runaway slaves if they left an abusive man. In contrast, Haudenosaunee society provided a shining example of what is possible when women are treated with respect. Read how early activists forged a path to women's equal rights using the ideals of their Indigenous neighbors.
GOODREADS / B&N / BOOK DEPOSITORY / KOBO / AMAZON
BOOK BLINK
* packed with historical photos
* written in an engaging way
* delivers facts smoothly, understandably and quickly
Did I mention tons of photos????
MY TIDBITS
I think this is the first time I've seen women's rights movement explained with connection to the indigenous tribes here in the U.S.. While anyone who has spent time learning about the tribes knows that these women did enjoy more equality than the, at the time, 'modern' societal women, the exploration of how this difference had influence on the movement in general isn't something often explored.
This book is short and, being in picture book form, attractive even to more reluctant readers. It isn't for younger readers, though, since it does carry heavier amounts of text and vocabulary more fitting to the middle grade audience. Even older readers will enjoy this one. It's divided into several chapters, with only a few pages in each one. The text delivers the information in an interesting way, making sure to describe the events, background, and historical tidbits in an understandable, down-to-earth manner. And the author remembers to keep it concise, sticking to exactly the information young readers need to gain a greater understanding of the situation and important individuals without bogging them down.
While the text itself is well done, it's the photos which bring this one to life and make it hit home. Every page is packed with images, which portray the mentioned individuals, situations and events. Readers can easily get a visual impression of what things were like and how various facts filter together. Plus, seeing the history adds a whole new dimension and makes it gain a better foothold in the mind.
Summed up, this is a well done book for anyone wanting to learn more about the Woman's Movement and how the local indigenous women, their thoughts, and their life styles played their part in shaping some of the movement.
on January 07, 2021