Review: The True Story of Zippy Chippy by Artie Bennett

Today, I have something super special. It's the true story of a very wonderful horse—Zippy Chippy. This one is definitely a little different in regard to the message...and that's a good thing! I really didn't know what to expect when I picked this one up, but it totally won me over. As did Zippy Chippy. Seriously, you have to LOVE Zippy Chippy.
Oh, and there's even a Teacher's Guide available. Just make sure to head to the very end of this post, and you'll see the link to it. 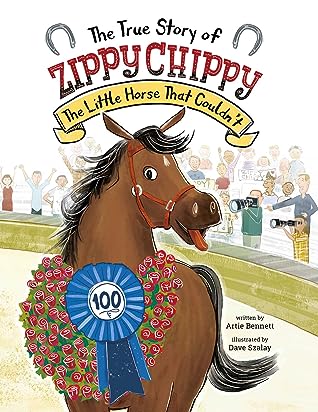 THE TRUE STORY OF ZIPPY CHIPPY
The Little Horse That Couldn't
by Artie Bennett
Illustrated by Dave Stanley
NorthSouth Books
Picture Book
40 pages
ages 4 to 8
A true story about the famed racehorse who lost every race but won everyone's heart.The bell rings and they’re off! Zippy the racehorse—descended from legends—is destined for glory, but when the other horses bolt from the gate . . . Zippy stands still. When people try to pet him . . . he bites their hats and escapes from his stall. What’s an owner to do? Keep on trying! After all, Zippy has become part of Felix’s family—and a close friend of his little daughter. And after 100 straight losses, Zippy shows everyone that—win, lose, or draw—it takes guts to compete and that you can lose and lose and still be a winner.
GOODREADS / B&N / BOOK DEPOSITORY / AMAZON
BOOK BLINK
*  heart-filled, humorous, and inspirational
*  great for beginning readers, too
*  takes a new twist on 'winning'
*  a few tougher vocabulary words...great for learning
*  bright illustrations 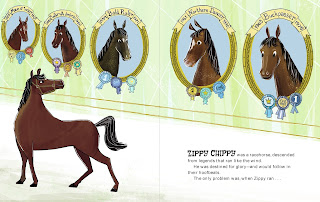 MY TIDBITS
While horse lovers will enjoy this one, it's a story which reaches across the board and inspires with a humorous and important twist.
Zippy Chippy was born to be a race horse with a stellular background and physical capability to match the best. But he always came in last, and sometimes, never left the gate. After loosing many races, his trainer decided to sell him. Despite Zippy Chippy's horrible record, he found a new trainer, who was convinced he could make Zippy Chippy a winner. But things ran in a very unexpected direction.
This is the true tale about Zippy Chippy, and it's one that guarantees a smile. Zippy Chippy is chucked full of personality. It's a wonderful, bitter-sweet tale, which touches the heart in a humorful and somewhat sad, yearnful way. And yet, there's a type of triumph that leaves the reader wishing they could meet Zippy Chippy themselves...and maybe root for him or share a peppermint candy.
While a picture book, the text also works well for readers who are getting more comfortable with their skills. There are a couple 'tougher' vocabulary words, and these make it perfect to expand word knowledge without becoming overwhelming. It also works, of course, as a read aloud, and as such will no doubt become one that will need to be read more than once. (It's one of those books that can expect an 'again'. And an 'again'. And an 'again'.)
The illustrations bring out Zippy Chippy's personality very well and make him hard not to love, and the message isn't one which a reader would usually expect. It's better. In any case, it leaves good feelings, inspiration, and the knowledge that everyone is special in their own way. It's the sort of tale that a reader/listener won't easily forget even in years to come. 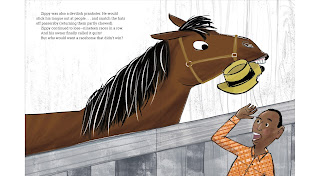 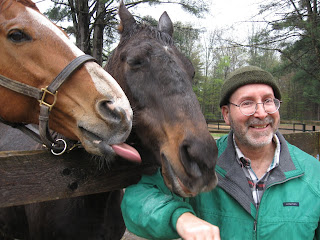 Artie Bennett is an executive copy editor by day and a writer by night. He is the author of an inspiring picture-book biography of a hapless, though beloved, horse: The True Story of Zippy Chippy: The Little Horse That Couldn’t. When Artie stumbled upon the story of Zippy Chippy, he found himself champing at the bit to introduce young readers to this remarkable tale of whoa! He is also the author of a quintet of hilarious rhyming picture books: The Butt Book, his first “mature” work and winner of the Reuben Award; Poopendous!, his “number two” picture book; Peter Panda Melts Down!, an adorable departure from derrières and doo; the explosively funny Belches, Burps, and Farts—Oh My!; and What’s Afoot! Your Complete, Offbeat Guide to Feet, which is guaranteed to knock your socks off. And if that’s not enough, he’s the author of two riotous joke and riddle books: The Universe’s Greatest Dinosaur Jokes and Pre-Hysteric Puns and The Universe’s Greatest School Jokes and Rip-Roaring Riddles.

He and his wife live deep in the bowels of Brooklyn, New York, where he spends his time moving his car to satisfy the rigorous demands of alternate-side-of-the-street parking and shaking his fist at his neighbors. The Show Me Librarian says: “Bennett’s use of rhyme is excellent; his stanzas flow and exude joviality in a manner that few writers since Dr. Seuss have truly mastered. Simply put, these books are a joy.” The Huffington Post says: “It appears there is no topic Mr. Bennett can’t make funny and educational.” Visit ArtieBennett.com . . . before someone else does!