I was in the mood for some dragons, and better yet, set in the mythical mountains of China...and all that in a modern day, middle grader's world. Doesn't the cover scream dragon adventure? This one is the beginning to a new series (which came out last September) and had me reading it in one sitting because... well, go on down and read my tidbits to see what I thought. 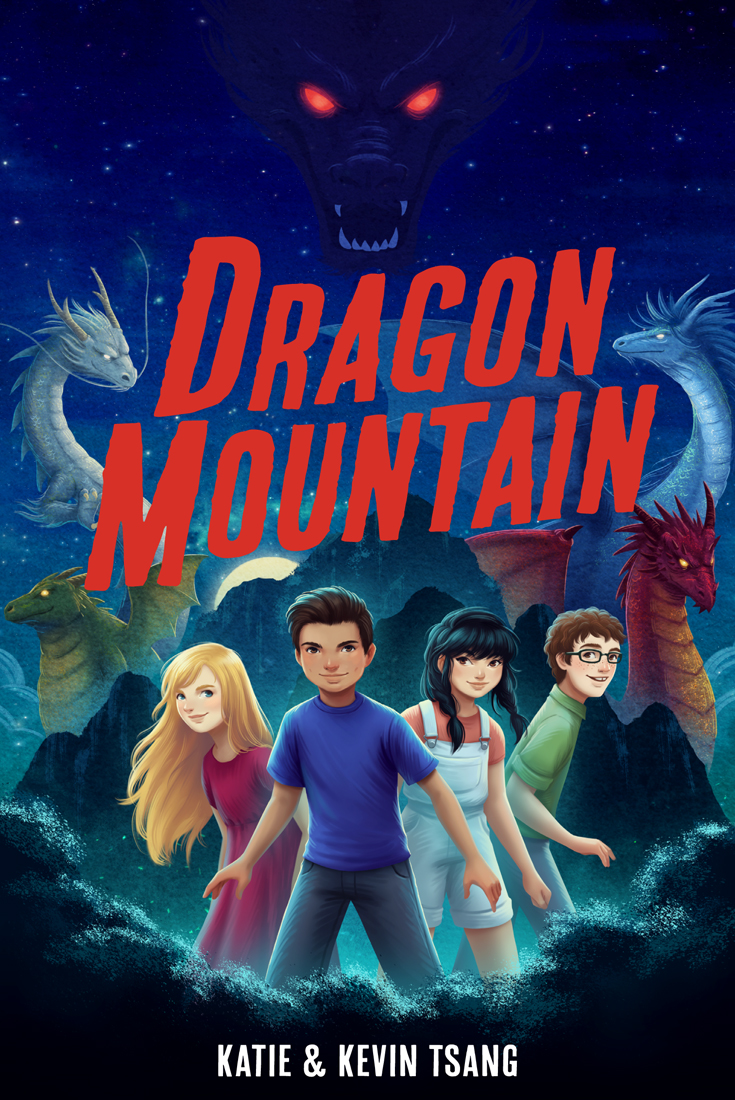 DRAGON MOUNTAIN
Dragon Realm, Book 1
by Katie & Kevin Tsang
Sterling Publishers
Middle Grade Fantasy
333 pages
ages 8 to 12
BEAST QUEST meets PERCY JACKSON in this epic new fantasy series.
Deep within the mountain, a great creature stirred in its sleep. Its eyes rolled back in its head, and its wings jerked wide open…When 12-year-old Billy Chan finds out his parents are sending him to a summer camp in middle-of-nowhere China he doesn’t know what to expect. There he meets fellow campers Dylan, Charlotte and Ling-Fei and together they stumble upon an age-old secret: four powerful warrior dragons, hidden deep within the mountain behind the camp. They have been trapped since an epic battle with the Dragon of Death and need the children’s help to set them free before terrible evil is unleashed on the earth. Billy and his friends must set off on a dangerous adventure that will take them to the heart of the Dragon Realm. But can they save the dragon and human worlds from destruction? DRAGON MOUNTAIN is the first book in the DRAGON REALM series by Katie and Kevin Tsang, co-authors of SAM WU IS NOT AFRAID.
GOODREADS / AMAZON / B&N / BOOK DEPOSITORY
BOOK BLINK
* diverse characters
* friendship conquers all
* China setting
* fast paced
* easy read
MY TIDBITS
What a fun read! Dragons get a chance to allow their awesomeness to come to full light, while kids do what they best—form friendships and save the world.
Billy Chan might have a father from Hong Kong, but he's a pure California boy with tons of surfing medals to show for it. Still, he has to head to a camp somewhere in the middle of no-where among the mountains of China to learn to improve his Mandarin. There he meets a group of very different kids from all over the world, who are about as excited to be there as he is (which is zilch). But from the very first moments, when the camp leader pulls out magical beads and claims the beads know how to divide the campers into groups of four, things start getting weird. Billy finds himself placed with three others, who might appear very different, but still fit together well. After facing a disappearing tiger, a hole opens up in the mountain and they are sucked in to discover four dragons, who've been waiting for them for many, many years. And the dragons have news no one wants to hear—great danger is coming to both Earth and the Dragon Realm, and these kids are the only hope either has to survive.
This is a great read for fantasy, magic, dragon, adventure and simply action fans. The pages draw in right away as Billy exits a train at a small, Chinese village and feels so lost it hurts. He's very easy to connect with and him, like the other characters, come across very natural, as if they could be a group of kids anyone might meet. The personalities are very different, and each of the four heroes is likeable in their own way...and each has their own kinks and quirks. But this one sets on imagination, adventure, and the dream of doing so much more than sitting around as adults would often have kids do. This tale lets dreams take flight with excitement around every bend.
Of course, the diverse characters and Asian setting bring along a nice flair, which is gladly seen in today's world. I did love diving into China and the mountain along with Mandarin and such. This acts more as a light peppering to the story, since it only sets the scene before the dragons come in. Nothing can compare to the amazingness of these dragons. (Yes, dragons...dragons...and more dragons.)
The tale is for middle graders, and it stays snuggly in this group. The language and grammar fit very well to the lower and middle range of the age group, and is actually a bit light for anyone older...which has its pluses and minuses. There isn't a super amount of depth, keeping this tale fun and action centered...which fits wonderfully to grades 4 through 6. I had no trouble reading through this one in a short evening and see even reluctant readers sinking into these pages.
It's a sheer adventure story packed with magic and dragon goodness, where friendship reigns. And I can recommend this one without a smidgen of doubt because middle graders are sure to enjoy every page.
on January 15, 2021