Review: To Whatever End by Lindsey Frydman

Today's book comes out tomorrow! So, if this one sounds like something you'd like to curl up with...or a young adult you know...you won't have to wait long to get your hands on the ebook version, at least. It's pretty clean with a bit of violence, but nothing over the top. 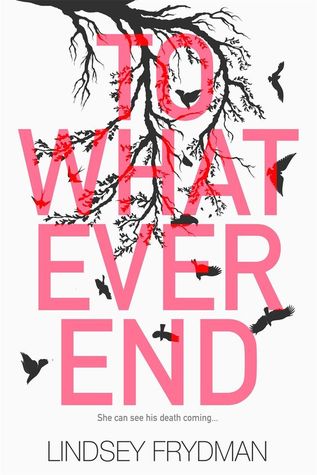 TO WHATEVER END
by Lindsey Frydman
Entangled Publishing
Young Adult Light Paranormal
320 pages
COMING...
JANUARY 4th!!!
What if with every person you met, after just one touch, you have a vision of the last time you’ll see each other? Ever. Normally, these visions are innocent—two friends just drifting apart, a random stranger that brushed past you then never crossed your path again.But not today.When I accidentally touch him, within only moments of our first meeting, I’m bombarded by visions of his death.And from what I can see, I’m the reason he dies.Now I just need to figure out why, and how to stop this from happening. Because not only am I to blame, but his very last words to me are...I love you.
GOODREADS / B&N / BOOK DEPOSITORY / AMAZON / KOBO
BOOK BLINK
*  Romance is the main, driving factor
*  Sold as fantasy but if anything, it's paranormal...and there's very little there
*  Mystery is the second driving factor...a little predictable
*  Set in modern day, during the summer break before the last year of high school
*  1st person with tighter cast
MY TIDBITS
While sold as a fantasy, this one slides more into the paranormal category and that with only a slight tip-toe over the 'paranormal' line. But young adult romance fans, who enjoy a dash of thriller/mystery tension, will enjoy this one quite a bit.
Quinn carries a several generation old curse, which allows her to snap a vision of the last time she'll see someone when she touches them. This has completely ruined her dating life, since she seen every break-up before it happens. Every attempt to change the results has been fruitless, but when she touches a 'hot' guy at the museum and sees him bleeding out in front of her with a gunshot wound to the gut, three words turn her world upside down—I love you.
If I would review this one as a fantasy (as it's sold), I'd have to mark it down a star just for not meeting that mark. But as a romance with a bit of tension, it's an engaging read. Quinn has a curse (as her family calls it), which hits one female of every generation a little differently. Her version has her seeing the last seconds she meets with someone, when she touches them. While this aspect alone could open up all sorts of plot directions, the author chops it off before it has a chance to bloom. As the reader, we only see the curse's vision the first time Quinn touches the hero of this tale. There's also basically no background given as to the origin of the curse or any other information surrounding it. Honestly, I found it disappointing that the only thing which seemed to interest Quinn was its hit on her dating life. But shove that all aside, view it as the beginning point to a romance (and not a fantasy), and the rest works more than well enough to create an intriguing read.
Quinn is a kind hearted young woman, who is easy to root for since she finally has a shot at love...something she thought was beyond her reach. Her hopes are more than understandable, and she's got the hero to slide right along into every emotional scene. He's sweet, a little dorky-ish, packs secrets, and makes her heart race the second he nears her. It's a bit of love at first site, but thanks to Quinn's concerns about seeing his approaching, violent death, even that works well.
The mystery end carries enough thrills to make each page interesting. It wasn't hard to figure out where the whole thing was going, but that didn't make it any less fun to read. I would have liked to have seen a bit more depth from the other characters... and maybe, more characters , since that would have opened the pool of 'who dun-it's quite a bit, but so, it was a very enjoyable read.
Lingering thoughts...what do you think?
If such visions happened, could reality be changed to keep them from happening?
on January 03, 2021

Email ThisBlogThis!Share to TwitterShare to FacebookShare to Pinterest
Labels: Lindsey Frydman, To Whatever End