Review: The Snake Who Baked A Cake by Afrough S. Hough 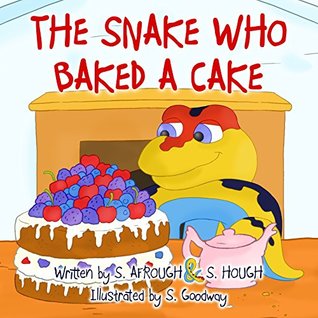 This is the story of a Snake who decided to bake a big cake.

Introduced with bright illustrations, this is a snake which truly belongs in the kitchen.

Jake's hungry. So he bakes a cake! And what an adventure that is.

This is not a long story but stays compact within just a few pages. But that doesn't mean that there's a reduction in fun. Jake's a bright, beautiful snake and his love for baking spills off of every page. Each step of the backing process is hit upon as this snake swirls together flour and all sorts of delicious things. It's fun to follow his antics and puts a smile on the face.

The illustrations are bright and demand attention. The squiggly flow of the writing makes it clear that this is a slithery read. It's a lot of fun to look at and read. It could be a bit longer, and allowed the illustrations to draw out larger and over more pages, but it's entertaining either way. The last picture hits with a sudden jolt and it seemed as if a little more was missing for the end.

This is a book which will make young listeners smile and definitely call forth the desire to bake.

Sisters Sara and Simin’s childhood was influenced by a variety of stories from Beatrix Potter’s Peter Rabbit, Roald Dahl’s Charlie and the Chocolate Factory, to The Adventures of Tintin.

Their grandmother also played a prominent role in their childhood. Sara and Simin have fond memories of visiting their Grandmother as children. One of which was helping her produce her cherry jam, a speciality that was made every year.
The sisters would also lend a hand to their Grandmother when she baked. They would then sit around and indulge in the bake while their Grandmother would share mythical tales, that served as analogies for moral reasoning.

Today, Sara lives in London while Simin lives in Liverpool with her husband and children.  Sara recently gained a PhD in Biological Sciences at Oxford University and looks to pursue a career in research.  Simin studied law and is pursuing a career as a commercial property lawyer.

After giving birth to Darius, Simin wanted to share stories and adventures to her son through books. A pilot baby book club had started a couple of months after Darius was born and despite, some would argue that he was too young, Simin wanted to take him to it. It was there that she was re-introduced to children’s stories. However, this time from a different perspective, as the storyteller.  Simin fell in love how a storyteller would engage and communicate with their audience. As her son grew older, Simin noticed how he would add his own creative twists to stories.

In writing their own children’s book, the sisters wanted a fun, colourful book with an element of everyday life that was interactive, baking in this instance.

The main character, Jake, was inspired by the California Red-Sided Garter Snake due to its vibrant colours. The sisters were drawn to a snake being the main charter, a limbless reptile yet long enough to be able to grasp objects by circling its body around them.

The text from the book is presented in a wavy pattern resembling a snake’s movement. A few of the words throughout the book have effects aimed at conveying their meanings visually to young readers.

The authors also wanted to have a black and white object running throughout the book. This was in consideration any children under the age of one and their inability to differentiate between similar toned colours.

The sisters’ aim for the book is not only to encourage bedtime reading but also to share invaluable experiences in the kitchen between generations.