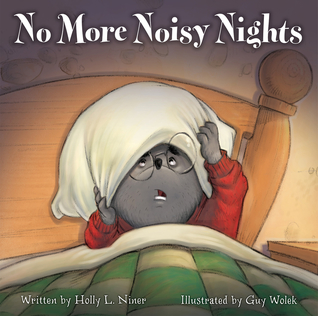 When tired Jackson climbs into bed after unpacking all day, he hears… OOOEEEeeeOOOEEEeeeOOO!BOOGETY WOOGETY WOO!Plink! Plunk! Plink! Who is making so much noise and how will Jackson ever get to sleep? Despite some silly, sleepy mistakes, genteel Jackson finds a fun and quiet activity for each of his noisy neighbors. He finally gets a great night’s sleep – and discovers three new friends in the morning.

Simple yet clever--this mole takes on the weirdest neighbors in a delightful way.

Jackson has just moved into his new home and can't wait to get some rest after all of the work he's done, but sleep doesn't come easy. The strangest noises come from above, below and even from his own house. Somehow, he has to find a way to deal with them and get some much needed rest.

Jackson comes across as a more traditional, serious mole. He has a normal mole home with perfect older, bachelor style. So when the strange noises start, it's time for a surprise. The noises come from the most non-traditional creatures and create a lovely contrast, which opens up all sorts of possibilities. The ghost and fantasy beings clash against Jackson, but he handles the entire thing with amazing finesse and cleverness. Without many words, the solutions slide into place and young readers will understand right away what's going on. In other words, this book does not talk down to them.

The illustrations are bright, crisp and bring across a snuggly atmosphere. Jackson's home, as well as Jackson himself, carry earthy colors and are illustrated in a familiar way. When the creatures come in, the surrounding atmosphere doesn't break, but allows their bright boldness to mold in to Jackson's world. There are small details to notice time and again, which keep those pages turning and insure the book will be revisited again and again.

The plot itself is simple, and the text just right for younger listeners to grasp. There's a wonderful balance between the story being told and unspoken actions, which are simply understood. While Jackson's problem might seem serious, there's a lovely dash of silly humor thrown in as well, which insures giggles without going over the top. It's a nice mixture, which kids ages 3 and up are sure to enjoy.

Holly L. Niner grew up in Newburgh, New York with her nose in a book and a boogey monster in the basement. she is a speech therapist and the award-winning author of Mr. Worry: A Story about OCD, I Can’t Stop: A Story about Tourette Syndrome, and The Day I Ran Away. Holly lives in Fort Wayne, Indiana with my husband and a lazy, crazy cat.

Guy Wolek has created art in many forms over his 35-year career - courtroom sketching, character development for animation and film, editorial and portraite work for newspapers and magazine, including as a  regular artists for the Chicago Tribune - and of course children's book illustration. In the past 20 years, Guy has illustrated over 600 projects.