Review: The Long-Lost Secret Diary of the World's Worst Pirate by Tim Collins 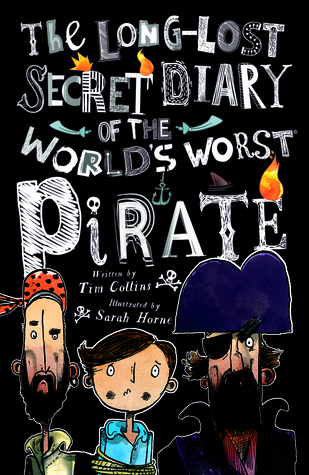 Meet Thomas—a young man sailing with his parents aboard a merchant ship in the 18th century and prone to daydreaming about living an exciting life as a pirate on the high seas. When a pirate crew led by Captain Bartholomew Morgan takes over the ship, Thomas stows away and is accepted into their motley gang. However, life as a pirate proves far less romantic than what he was expecting. The hilarious Long Lost Secret Diary series put readers inside the heads of hapless figures from history struggling to carry out their roles and getting things horribly wrong. The accessible, irreverent stories will keep young readers laughing as they learn the importance of not being afraid to learn from one’s mistakes.

With the rawness of the sea, this book attacks the life of pirates and adventure but with a tidal wave of reality which has romantic idealism walking the plank.

Thomas is sailing across the sea with his parents to their new home, but the merchant ship is not nearly as exciting as a pirate ship would be. When Thomas spots a ship on the horizon, the adventure begins. Convinced the pirate life is the life for him, Thomas manages to become part of the crew, but soon he learns that pirating isn't nearly as neat as he thought it'd be.

Written in diary style, Thomas recounts his adventure of entering pirate life, not the life portrayed in myth and fantasy, but a harsh, more historical version. Thomas isn't a hero, and he isn't overly coordinated or intelligent. He's just a kid, who has to somehow make it through one of the biggest mistakes he could ever make. His reactions are hilarious, his decisions sometimes faulty, but he has determination and learns his lesson well.

For readers interested in the history of pirates, this book is a chest of gold. The situation, events and surroundings are not romanticized but hit with a dose of daily life...the kind that isn't easy or grand. Thomas faces true troubles and pirates who really aren't secretly moral or friendly. Some things are funny, others are simply harsh (such as an amputation with a saw). As an extra bonus, there are information breaks, which explain real historical facts along the way. All of this is rolled into a quirky adventure, which keeps the story rolling, and a character whose mishaps guarantee chuckles despite the more serious aspects. The book, however, is not written in a historical style, but the narration and characters keep the modern day vocabulary and style, making it an easy read for kids.

While the diary style lets the true life come through clearly and lets the humor shine, it is very narrative and leaves Thomas at arm's length. The tale lacks the personal touch, making it hard to slide into Thomas's shoes and truly worry about him. His lack of concern for his family is also surprising. Not only is Thomas a little flat, but the narrative form, especially in the first chapters, doesn't pull into the action as much as it could. Still, kids who love pirates are sure to enjoy this read. The information is rich and the added humor make it easy to digest. The modern writing style is actually an extra bonus and insures that even more reluctant reading pirate fans will happily dive into these pages.