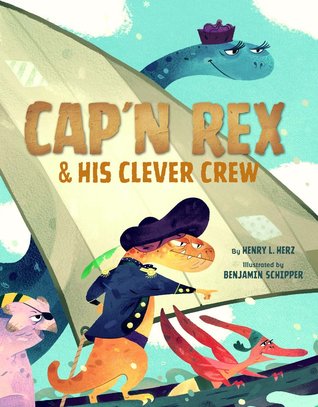 
Shiver me timbers! It's the DINOSAUR PIRATES!

Meet Captain Rex and his band of buccaneers. These dinosaur pirates sail the seven seas in search of buried treasure, but whenever they hit an obstacle—like a giant shark or pea-soup fog—the crew members are quick to say they can’t overcome. To this, Captain Rex just glares with teeth bared and says, “CAN’T YE?” And, somehow, the crew always comes up with a clever solution.
A delightful story about using one’s creativity and individual strengths to solve problems. It will encourage kids everywhere to think and say, “I can!”

Dinosaurs set sail in a cute and quirky pirate adventure.

These dinosaurs are serious pirates, and they are ready to head into adventure. Dangers mount as they embark to find the buried treasure, but no matter how hard things get, these pirates are determined to make it through.

Dinosaurs meets pirates--a combination which is sure to make many young boys' hearts pound faster and their imaginations take flight. This isn't a serious book, but sets out on pure adventure and fun. The captain and his crew are as salty as pirates should be but still pack a ton of humor and silly fun. Blunders and troubles mark every step of their journey, and it's fun to see what happens to them on the next page.This is not an informative book in the sense that learning comes first. rather, this is a quirky adventure with a bit of pirating fun and a few things which can be learned along the way - the kind kids can take out and use to pretend they are pirates too.

The text is kept at a minimum and comes bright and bold when the situation demands it. Fun, pirate words and phrases are peppered in between the excitement and silliness, and just in case some of these terms aren't familiar, a glossary with definitions is hoisted on the last pages. The illustrations are simple and bring across the atmosphere well. Each hilarious event comes to life, insuring giggles and snorts. This is a lovely adventure, which sails off into goofiness with a crew one will either love or simply find odd. But it's a combination which is hard not to smile at and enjoy.

Henry Herz has an engineering BS from Cornell, an engineering MS from George Washington University, and an MA from Georgetown University, none of which helps him write children's books. Nevertheless, his love of fantasy and science fiction inspired him to write the picture books Monster Goose Nursery Rhymes, When You Give an Imp a Penny, Mable and the Queen of Dreams and Little Red Cuttlefish. He lives in San Diego, CA with his wife and two coauthor sons, and enjoys eating Boston Creme Pie.  You can find out more about him and his works at henryherz.com.

Benjamin Schipper has created illustrations for Highlights for Kids, Knopf, Penguin Random House, Amplify, Chick-Fil-A, and Children's Theatre of Charlotte. He lives in Greenville, SC
with his wife Karen and their little black dog Willow.