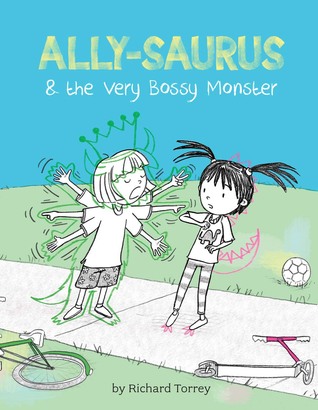 What happens when a bossy new girl tries to make everyone play by her rules?
Ally-saurus is back—and ROARING louder than ever!

Ally-saurus and her friends always have lots of fun playing pretend. They stomp, they roar, they dance, each in their own way. But new girl Maddie wants everyone to play by HER rules. “Monsters can’t be dinosaurs or dancers,” she insists. Worst of all, she won’t let little Petey have his teddy bear! Can Ally-saurus help Maddie understand that bossiness is no fun at all?  With charm and humor, Richard Torrey teaches a gentle lesson in respecting each other’s differences . . . and playing nice.

The power of imagination combines with an enthusiastic heroine to tame even the fiercest monsters of reality.

Ally and her friends love to pretend, and each has a favorite role they slip into--dinosaurs, a performer, and a bear. . .kind of. The three have so much fun until the new girl in the neighborhood, Maddie, steps in and wants to lay down tons of rules. All of which serve her purposes, of course. Ally and her friends want to be nice and try to play along, but at one point, things get out of hand.

Imagination flows from every page, letting its magic unfold as Ally and her friends are swallowed up in their own delightful worlds. The role play is something many kids do every day. Readers/listeners will have no problem understanding Ally and feel the urge to follow in her dinosaur footsteps or slip into a fantasy all of their own. The illustrations do a fantastic job of bringing this 'extra' skin to life, and mold reality with fantasy, while, at the same time, keeping it clear which is which. The balance between black and white with only gentle colors in the background, hold the focus on Ally and her friends. The crayon outlines building the imaginary roles onto the characters, make it clear how the characters see themselves (and let the reader sink into this game) while still keeping a solid foot in reality. The combination is simply clever.

When Maddie steps in, her monster shines through. Her actions and words bring cringes as she falls into a mold kids will recognize from their own experiences. But Maddie's own uncertainty comes across as well. Ally handles the situation with a bit of hesitation, but then total finesse. And the ending is an inspiration, which offers a solution readers can maybe use themselves.

Richard Torrey is an author, artist, and editorial cartoonist. He has written and illustrated 15 books, including Sterling's Ally-saurus & the First Day of School (2015); the popular Beans and Baker series for Random House; and the three-book series Almost, Why?, and Because for harperCollins. he's also illiustrated dozens of books for Simon & Schuster, Golden Books, McGraw-Hill, and Scholastic; has had his art published in Highlights, KidCity, and Inside Sports; and has created a successful line of greeting cards for Recycled Paper Greetings.

Richard lives in Shoreham, NY and is available for interview. Visit him online at: