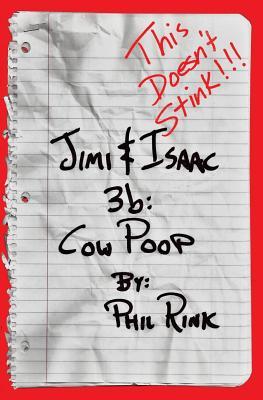 
Jimi & Isaac think they are going to have a fun summer away from their parents and on Grandpa's farm. They quickly realized that living on a farm is more than sunshine and hay rides, it's real work. There is a lot to learn about the chickens and the dairy cows and life in the country. They learn as much as they can as fast as they can, so they can help with the fun chores. Just as they are getting in the groove, Grandpa gets hurt pulling a calf and it's up to Jimi and Isaac to get all the chores done. It's up to them to get the cows fed. It's up to them to get the cows milked, and the eggs and the milk to market. Sure, Grandpa's friends and family can help, too, but they all have their own farms and busy lives. Jimi and Isaac Books are strongly and unapologetically informative! Sometimes they read like an instruction manual, because the kids that read Jimi and Isaac Books read a lot of instruction manuals and non-fiction. They watch TV shows and YouTube videos about building stuff, and they don't hesitate to tear something apart to see how it works. Our hope is that a focused kid will pick up one of our books for the stated subject matter, and then trust Jimi and Isaac enough to follow them into another area of interest. In every book, a problem presents itself and the boys need to learn and work to solve the problem. They fail constantly, struggle to recover, and success is often a less limited failure. The books are short and fast moving so more readers can succeed, but they are not simple books. They're full of information and intellectual challenges.

Winner of the Mom's Choice Award 2017


This is a great book for kids, who dream of farming, and those who would love to save the day in a more realistic way.

Jimi & Isaac are off to Jimi's grandparents farm to help out for a few weeks. But when Jimi's grandfather is badly injured and put into the hospital, the boys are left to keep the dairy farm running. Of course, friends, neighbors and family help out where they can, but they have their own lives to deal with too. So it's mostly up to Jimi and Isaac to do their best and more to save the farm.

Cow Poop is the latest book in the Jimi & Isaac series and the first one that I've read. But that doesn't matter because these are written as stand-alones, each one opening up to a brand new adventure.

Jimi and Isaac are pretty normal boys in every way. Their actions and dialogue come across as natural as if they just happened to be kids from down the street. They're kind, hard working, sometimes a little goofy, always have fresh ideas and simply do the best two boys can do. In this book, Isaac isn't accustom to life on a farm and has a lot to learn. His mistakes are understandable and could happen to anyone, and his questions make sense. And it's exactly these moments of wonder and confusion which open up the door for fitting explanations.

This book isn't only about Jimi and Isaac's adventure but offers a treasure chest on farming information. It's obvious that the author knows exactly what he's talking about as the secrets of farming life are uncovered. And not once in a boring way. Everything from chicken eggs to haying to animal manure is mentioned and then some. The information is not always the everyday kind found in many children books either, but this touches upon things only real farmers know. This book hits the reality of farming and does it well.

The adventure itself is well-paced and never leaves a boring moment, although it concentrates only on the farm. The surroundings are vivid and clear, letting the barn yard and dairy come to life as if the reader were there. There are a few depicted moments like the grandfather's injury, which may be a bit much for younger readers to stomach. So sensitive readers might want to be warned.

All in all, this is a wonderful story of friendship, working hard to achieve even the seemingly impossible, and diving into something new. It's also a great read for classrooms and home schoolers, and offers a fun way for kids to learn more about farming and what it really entails.


Find out more about the series: http://jimiandisaacbooks.com/

Phil Rink's last book, Jimi & Isaac 5a: The Brain Injury, was awarded a Kirkus "Star" review and was chosen as “Best Books of 2015”. https://www.kirkusreviews.com/book-reviews/phil-rink/jimi-isaac-5a-brain-injury/
on August 11, 2017