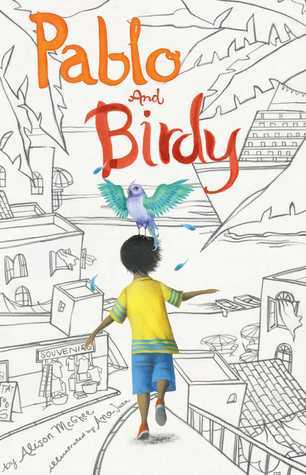 
A boy who drifted into the seaside town of Isla as a baby searches for answers about where he and his parrot came from in this charmer of a tale laced with magical realism from New York Times bestselling author Alison McGhee.

The seaside town of Isla has many stories, the most notable being the legend of the Seafaring Parrot. Locals claim that the Seafarer remembers every sound, every whisper, cry, laugh, or snort ever uttered. But, though there have been rumored Seafarer sightings, no one has actually seen the bird before. Other stories surround a boy named Pablo, who had washed up on shore in a blow-up swimming pool as an infant with only a lavender parrot as a companion. Now, on the eve of his tenth birthday, the stories are repeated.

“At first I thought it was a huge fish,” Emmanuel, the man who found and took Pablo in, says. Pierre, the baker’s guess was a good one: Perhaps Pablo has come from an undiscovered country, one unknown to the rest of the world. Maybe the inhabitants there lived in tree houses, or underground. Or maybe he’s a pirate baby. But Pablo wants the truth, and the only one who might know it is Birdy, his parrot. After all, she was there, holding onto the raft. But unlike most birds who live in Isla, Birdy can neither talk or fly. Or, at least, she never has. Until…one day, when strong winds begin to blow—winds similar to the ones that brought Pablo to shore—Birdy begins to mutter. Could Birdy be a Seafaring parrot? If she is, then she will be able to tell Pablo the true story of where he came from—of who tied him so lovingly and safely to that raft? But, if she is, that also means the second part of the Seafarer myth is true…that Seafaring Parrots will, eventually, fly away.

As Pablo is buzzing with questions, hopes, and fears, an old saying echoes in his mind: winds of change mean fortune lost or fortune gained. And while the winds rise in Isla, Pablo holds tight to Birdy. Would losing his companion, his dearest link to his past, be that loss?

A heart-warming tale about the bonds of friendship, pains of the past and the hope, which a change in the winds might bring.

After a large storm, Pablo was found washed up on the shores of an island, bound inside a child's swimming pool with Birdy, a parrot, as his loyal guard. As Pablo is left with a fear of the sea and storms, Birdy carries his own scars and refuses to talk or fly. Ten years have past, and Pablo and Birdy have become an integral part of the small town, where the story of a never-seen Seafaring Parrot which can fly impossible distances over the ocean and hears/speaks every noise ever made, draws in tourists by the troves. When the 'winds of change' come with an approaching storm, a news woman and her team of scientists set out to be the first to find and capture this mysterious bird. Since no one even knows if this bird exists, this doesn't seem to be a problem. But then, Birdy speaks and it's in a voice Pablo only holds in his deepest memories--the voice of his own mother.

The setting alone comes to life like a masterpiece. The small, island town over-flows with a vibrant but simple life. The details dribble in allowing the smell of the bakery or taste of the breeze to settle in on every page. But it's the characters which really add the zest. There are only about half a dozen human ones and a few birds, but each one has an unforgettable personality.  They don't always get along or agree, but this is a town where everyone sticks together and does the best they can. It's a true home with a sense of safety, which makes it hard not to love the town and the people.

Pablo has a sad, secret past, and this hangs as a gentle, longing pain in the background. He's full of life and clings to his best friend Birdy with so much love that it's hard not to want to hug both of them. Behind Pablo's light-hearted mask, he holds a ton of questions and a longing sadness, which he only shares with Birdy. And Birdy loves him back. Unconditionally. It's an inspiring relationship, which touches the heart.

The story flows at a very steady pace and never leaves a dull moment. Pablo's concerns carry layers of mystery, ones which demand to be discovered. The serious moments are spiced up with a quirky band of parrots, who despite their slim parrot vocabulary, make their thoughts more than known and ensure many giggles. Even the townspeople add a perfect sense of humor as their rich and humorous personalities clash, and bring out the funnier side of working over differences and living together. The added chapters of a stray dog and his own difficult past--but as an amazing desire for the bakeries elephant ears--are like a cherry on top of an emotional sundae.

As a special treat, there are wonderful illustrations sprinkled between the pages. These pencil drawings add a lovely glimpse at the characters and scenes, and appear at all the right times. But then, I'm always a huge fan of illustrations, especially in middle grade fiction.

Above all things, this is a story with heart. Mountains of it. Pablo and Birdy are impossible not to love, and the townspeople are natural neighbors, which one wishes they could have. Pablo's search for answers, his attempts to save Birdy and the ache of discovering the truth make this an unforgettable tale. Add the flavor of a South American island, and it's a book kids ages 8 to 12 (and even older readers) are sure to enjoy.

Alison McGhee writes novels, picture books, poems, and essays for all ages, including the forthcoming novel Never Coming Back (out in October 2017) and the #1 NEW YORK TIMES bestseller SOMEDAY, illustrated by Peter H. Reynolds. Her work has been translated into more than 20 languages. She lives in Minneapolis, California and Vermont.

You can find Alison McGhee. . .