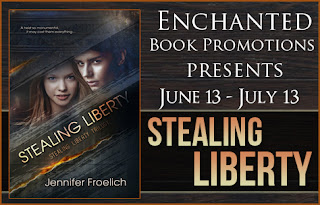 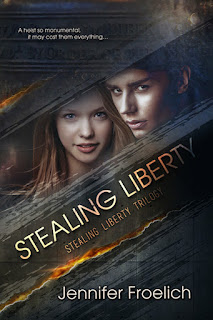 A heist so monumental, it may cost them everything... When Reed Paine is sent to a secret detention school for teens whose parents are branded enemies of the state, he doesn’t expect to find friendship – especially after coming face to face with Riley Paca, a girl who has every reason to hate him.


But when Reed, Riley and a few others start reading the old books they find in tunnels under the school, they begin to question what they are taught about the last days of America and the government that has risen in its place.   Then the government decides to sell the Liberty Bell and Reed and his friends risk everything to steal it – to take back their history and the liberty that has been stolen from them (Stealing Liberty/ Clean Reads).

History texts call Grandma’s generation the Lost Ones, but just in passing. Teachers talk about them quickly, always ready to move on. But Grandma was a great storyteller, which made sense when she finally told me about Floodlight .  Grandma said people spent a lot of time imagining the future when she was a kid. In movies, books and music, they thought up utopias, dystopias. They wrote about technology taking over or disappearing altogether. Most of all they imagined change.  It’s not surprising. She was born during the dawn of cell phones and cyberspace, after analog gave way to digital. When plasma fought with LCD, then disappeared for LED, 3D and pixel paint. Satellites crowded the atmosphere. Electronic books were born, everyone began storing data on the cloud. Transportation engineers built the first bullet train and laid the first mag tracks. Gaming systems mimicked movement. Robots performed surgery and medicine got smart. Retinal grafts got to be as popular as tattoos. The first nanochips were installed, then the first tragus implants, allowing us to sync our data with any device we hold.  Everyone looked to the future and wondered what next?


Grandma said people rush to extremes, but never settle on the truth. No one knew the great technological advances characterizing the past two centuries would stagnate, too gradually to be noticed.   And the change?  People celebrated it. Then they fought over what it meant, who had the right to make it happen and who should just shut up. But they didn’t understand. It was happening with or without their permission, and never how they envisioned it. Like a pebble you nudge with your foot, only to watch it roll down a hill and start an avalanche. You could have stopped the pebble, but why would you? How could you know it would destroy a town, a city, a nation? “We were rich and spoiled,” Grandma said, “throwing away more food than we ate, living from one form of entertainment to the next. Offended by everything, we grew weaker still, building bubbles around our opinions, enraged by anyone who shared ideas not matching the most popular narrative. War and disease caught us unprepared, which is why most of us didn’t survive.”


Jennifer Froelich published her debut novel, Dream of Me, in late 2011, which reviewers praised as "well-orchestrated with outstanding imagery." Her second novel, A Place Between Breaths, published in 2014, was called "a roller-coaster ride with enough twists and turns to keep everyone interested" and won an Honorable Mention in Writer's Digest's 23rd Annual Self Published Book competition. Jennifer is a frequent contributing author to Chicken Soup for the Soul.  A graduate of the Walter Cronkite School of Journalism at Arizona State University, Jennifer worked for many years as a freelance editor and writer before publishing her own work. She lives in beautiful Idaho with her husband, two teenage kids, and a rescue cat named Katniss.