Review: Mustaches for Maddie by Chad Morris and Shelly Brown 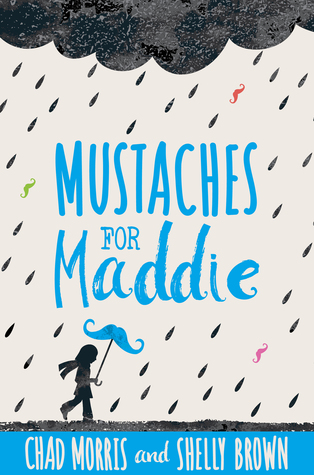 Maddie is a normal twelve-year-old girl. Well, except for the fake mustaches she carries in her pocket. She likes to make people laugh and slapping on a mustache, especially a fuzzy pink or neon green one, always gets a smile. Maddie hopes that the class queen, Cassie, will find her mustaches as funny as she does and want to play with her at recess. She's been self-conscious lately because her right arm only feels normal when it's curled against her chest and she's constantly tripping over her feet. But that's probably just part of growing up and not something weird, right?
When Maddie's arm continues to bother her, her parents take her to a doctor who gives them a shocking diagnosis: the cause of the abnormal behavior of her limbs is a brain tumor and she must have surgery to remove it. She's understandably afraid as he describes the procedure, but knows she must find a way to be brave and must face her fears--all of them--at the hospital, at home and at school.
She will need all of her courage not only to face her illness, but also to face Cassie at school. Both Cassie and Maddie are auditioning for the same role in the school play, but when Cassie accuses Maddie of lying about her tumor in order to get attention, Cassie's bossiness turns into bullying.
And as Maddie's surgery approaches, she begins to worry more and more about the outcome. What if something goes wrong? What if the doctors don't get all the tumor out of her brain? What will happen to her family? What will happen to her?
It will take all of Maddie's vibrant imagination, a lot of kindness-both given and received-and of course, the perfect mustache to overcome the tough stuff ahead of her.


With the perfect balance of humor, this story takes on a girl's heart-breaking diagnosis and turns it into an inspiration to make dreams fly.

Maddie is twelve years old and all the problems it brings, especially when it comes to surviving sixth grade. Her biggest problem is the popular girl named Cassie. Maddie bumps shoulders with every other girl in her class just to remain in Cassie's good graces and have the right to be friends with her. But Maddie's gut keeps telling her that what Cassie does to those she doesn't befriend isn't right. Maddie starts to stand up for herself letting her quirky humor cushion her on the way, but just when things seem to be smoothing out, the real monster hits. Maddie has a tumor near her brain.  Even her pocket full of fake mustaches can't form a smile out of this news.

This is one of the better middle grade novels I've read in awhile. Maddie is a lovely girl, not an outcast but not the most popular either. She's simply average and fights as best she can, along with the other girls, to stay in the good graces of the popular crowd. Still, she's nice, has a good heart and struggles inwardly when she's about to do something she shouldn't. In other words, she's an average girl that is easy to understand and empathize with. Her quirky humor sets her apart. Not only do the mustaches in her pocket raise eyebrows but her imaginative outbursts about poison claws and deadly monster waiting for sudden attack, make it clear that she's not your average 6th grade girl.

The writing in this is a perfect balance between fun and the more serious side of life. The topics are heavy but the authors manage to keep the point without bogging down. Middle graders will have no trouble sailing through this read, feeling for Maddie, but still coming out with a smile and tons to think about. A book that leaves the reader in deep thought always gets bonus points from me.

The sixth grade world and it's hurdles are things readers will recognize and be able to compare with their own lives, but other things didn't quite fit. Maddie and her class mates' fairly extensive knowledge of Shakespeare, his works, and his characters, however, does not fit the age group and will leave the intended audience scratching their heads.

But I would highly recommend this book and find it a gem both boys and girls are sure to enjoy.
on July 12, 2017