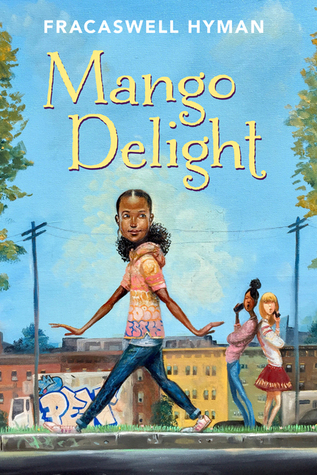 
Mango is as delightful as her middle name indicates, and middle-grade readers will easily recognize their own experiences in her friendship struggles.
What happens when your BFF becomes your EFF . . . EX-Friend-Forever? When seventh-grader Mango Delight Fuller accidentally breaks her BFF Brooklyn’s new cell phone, her life falls apart. She loses her friends and her spot on the track team, and even costs her father his job as a chef. But Brooklyn’s planned revenge—sneakily signing up Mango to audition for the school musical—backfires when Mango not only wins the lead role, but becomes a YouTube sensation and attracts the attention of the school’s queen bee, Hailey Jo. Hailey Jo is from a VERY wealthy family, and expects everyone to do her bidding. Soon Mango finds herself forced to make tough choices about the kind of friend she wants to have . . . and, just as important, the kind of friend she wants to be.


This book hits the life of a twelve-year-old girl square on, letting friendship, betrayal, jealousy, first love and all other curves of life's roller coaster fly free in a lovely tale with a delightful girl.

Mango and her BFF, Brooklyn, are inseparable and fated to be. . .or so Mango believes. When, for the first time ever, Mango beats Brooklyn in the 400 yard dash and comes in 1st place, Brooklyn doesn't cheer for her. Instead, she convinces her mother to buy her a cell phone and slides her way into the snobby Hailey Jo crowd. Bad luck hits when Mango accidentally breaks Brook's cell phone, but this luck is about to turn around.

Fracaswell Hyman does a fantastic job of bringing these characters to life. They are as natural as if they were walking down any middle school's hallways. Mango is sweet and has all the worries girls that age do, but she takes them on with a wonderful finesse. Not always without mistakes, but her attitude is an inspiration. Much of this also comes from her family, which is constantly supporting her even though they don't always agree with everything she does. Mango's parents listen and offer words of wisdom, and these words aren't only good for Mango to hear, but make the reader stop and think as well. It was refreshing to see such a healthy family balance, and how harmonizing doesn't always mean seeing things eye to eye.

A lot happens in this story, keeping the pace steady the entire way through. It was no problem to sit down with this and read it from beginning to end without once having the urge to set it down. There are serious moments, sad ones, shocking ones and a dash of humor and attitude to spice it up too. It's the kind of book readers (especially girls) ages 9 and up will be able relate with and see themselves in similar situations as they root for Mango the whole way through. And readers might even grab a bit of wisdom for their own lives along the way.

I'm so excited to share this with you! Fracaswell Hyman was kind enough to answer a few questions surrounding his book, his life and all sorts of good things in between. I thoroughly enjoyed reading his answers and hope you will too.


I did a little bit of internet stalking and found a statement you wrote on your blog: "Writing was never meant to be a way of life for me." What did you hope would be your way of life, and how did you fall into writing?

I grew up dreaming of become an actor. As a child, television was my window on the world.The lives characters were living on my favorite shows were much more colorful, fun and exciting than mine. I studied theatre in college and spent many years on the road in regional productions, a few television and movie spots and working with improvising groups that dealt with kids. This is where my writing began. After years of studying and analyzing scripts, I found that I understood characters and story structure by osmosis. A producer saw a one act play I wrote to act in with a kid for The 52nd Street Project in New York City. She thought I had a good ear for dialogue and the way kids speak and that is how the door to writing opened for me.

Your career shot off in several directions; you've worked in television with a variety of shows and, now, as a novel writer. Is there one story/project that has been a bit more special to you than others?

I had a great time as head writer/executive producer of the live-action Nickelodeon sitcom, TAINA, which was created by my good friend, Maria Perez-Brown. I’ve always loved live action work, because it’s not lonely. Yes, you write alone, but then every week you gather with the cast and crew and put on a show. When you are lucky enough to work with people you love and you get to laugh all day, even in the midst of facing crushing deadlines and network notes, well…there is nothing better. Working on Taina is the experience I remember the fondest.

It does sound like fun and a blessing to get to work like that! But you're right, the writing part is done alone. Or maybe not, if we count the characters in our heads. In your latest book, Mango Delight, you placed a cast of many delightful characters. I especially loved Mango's father's occasional words of wisdom - great stuff! Did you have someone like that in your life?

In most of the television shows I’ve written there has been an ideal dad. The dad that I’ve always dreamt of having. Not to put my dad down at all, but I realize that the dads in my shows and books take the time to really talk to their kids, play with them and enjoy being around them. That’s the kind of dad I aspire to be, the kind I wish I had. Don’t get me wrong, my father and I are fine now and over the years he has become the dad I wished I had in a lot of ways. The dads I create have huge shoes to fill for any man, but the dads in Mango Delight, Gullah Gullah Island, Jett Jackson and Little Bill are the ideal fathers in my mind.

What is your favorite part about writing? And what would you rather eat worms than do?

My favorite part of writing is when the story just flows and I follow the characters lead and get surprised by what they say or do. It’s incredible. My heartaches at times from the things I have to put my characters through, but that’s the job. Sometimes I leave my office elated, or in despair depending on what just happened while I was writing. I laugh along with my characters and cry along with them, too. It’s a very intense and wonderful process when it all comes together like that.

Merlot. . .I hadn't thought of that, but it would fit. I've always wondered if deep frying might help them go down better. There would probably be nothing left but breading.
Many authors were avid readers during their childhood. What were you favorite books while growing up?

I believe I read all of The Hardy Boys and Sherlock Holmes. But above them all, there is a book called, The Learning Tree by writer/photographer/film director Gordon Parks that really spoke to me. It was about an African-American boy coming of age. I think it was the first book I read where the main character looked like me. It had a huge impact. It is the reason I believe we must have diverse books, so that children from all cultures can read about characters that look like them, speak like them, and share their specific experiences. I also believe we must encourage kids to read books about characters and cultures that are not their own, because it gives us an understanding of the “other” and how similar we all really are.

And that's exactly what you in Mango Delight. Loved it!
What book are you reading right now?

I’m performing in a play this summer, Two Trains Running, by August Wilson. So, I’m reading all ten of the plays he wrote. I’m loving “The Interestings” by Meg Wolitzer. My audiobook of the summer is, Born A Crime, by Trevor Noah, it’s fascinating, funny and heart wrenching.

I'm going to have to check those out, especially the audiobook.
When you aren’t writing or acting or script writing, what do you like to do (as if you could have much free time left)?

I believe we are in the Platinum Age of television, so when I’m not writing, I am bingeing on Netflix, HBO and all the great shows that are coming at us so fast and furiously. From Game of Thrones to House of Cards, Orange is the New Black, Breaking Bad, Better Call Saul, Orphan Black, I mean there are so many great shows out there it’s hard to keep up. So, yeah, I become quite the couch potato when I’m not writing. But don’t get me wrong, I go to the gym, too! While I’m on the elliptical for an hour and five minutes, I’m watching the shows I’ve downloaded to my iPad!

I balance my kindle on my treadmill...sometimes with books, other times with movies...so I understand that one.
What was your biggest wish as a child?

As a child, my biggest wish was to be able to fly. Of course, I’m deathly afraid of heights, but I always wanted to just be able to lift off from the ground to escape bullies, or stray dogs or avoid the NYC transit and get home where it was safe. You know, I think I should write about that…

I could see that. Maybe as a picture book? The crazy situations and amazing illustration possibilities will be following me for days now. So thumbs up on that idea!

Anyway, thanks a bunch for stopping by, and good luck with all everything you're up to and still have underway!

Fracaswell "Cas" Hyman is an award-winning television writer (Humanitas Prize, Alma Award, Peabody Award) and screenwriter (UCLA extension best screenplay winner.) He is also a playwright, theater and television director, and producer who has created and executive produced successful live-action (The Famous Jett, Jackson, Romeo, Taina) and animated (Little Bill) television series for Disney and Nickelodeon. Cas lives in NC, and Mango Delight is his first novel. You can connect with Cas on Twitter @fracaswellhyman.