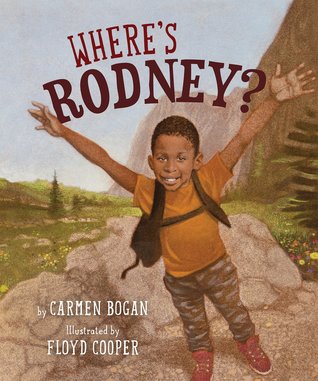 Rodney is that kid who just can't sit still. He's inside, but he wants to be outside. Outside is where Rodney always wants to be. Between school and home, there is a park. He knows all about that park. It's that triangle-shaped place with the yellow grass and two benches where grown-ups sit around all day. Besides, his momma said to stay away from that park. When Rodney finally gets a chance to go to a real park, with plenty of room to run and climb and shout, and to just be, he will never be the same. This is a story of the power of nature to transform every child. -Scientific research now confirms what we already know: We become more relaxed, more open and friendly, and more creative, with better memory and concentration, after being in nature. Nature lowers blood pressure, reduces stress, and bolsters our immune system. In fact, the benefits from contact with nature are now so well documented that they're showing up on the health care industry's agenda, and protecting nature can be seen as a public health strategy.- Bay Nature, January 1, 2017


Combine an energetic city kid with the great outdoors, and out comes an amazing tale.

Rodney can't sit still. He'd rather be outside watching bugs or birds or whatever else might be moving. When the teacher threatens him with not allowing him to go on a field trip to the park, he figures it's no big deal. Until he gets to the park. Then, a whole new world opens up.

This book takes a kid who's grown up between streets, buildings and a few city parks and introduces him up to the wonders of the freedom of nature. The illustrations by Floyd Cooper are perfect for bringing across true inner-city scenes as well as the fresh air of the great outdoors. Kids will recognize themselves in Rodney and feel his excitement and wonder as he explores the various yet simple activities nature has to offer.

The story itself is well written. The first pages present Rodney and his troubles in a way kids ages four and up will be able to sympathize with. Then, when Rodney hits the park, the words skim down to only a simple phrase or two. And that's all that is needed. The fun Rodney has is as easy as these few words, yet wondrous and full of adventure. By the end, the reader wants to head out and explore forest, rocks and streams to experience the fun themselves.

CARMEN BOGAN is a member of the Oakland Literacy Coalition and is a writing coach for children and youth. she has two daughters, Erin Danielle and Natalie Quinn, and lives in Oakland, California, with her husband, Willie.