Sneak Peek: Sketches of My Soul by TC Booth with Giveaway

The book blitz runs from 3 till 9 July. See the tour schedule here. 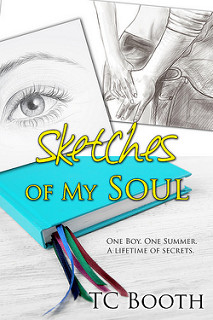 Sketches of My Soul
Sketches #1


by TC Booth
YA Contemporary


In the game of life, I was used to being on the losing team. The odds were stacked against me. Tegan’s Team—a mom who tried to control me, a dad who would rather drink then spend time being a father, a lying ex-boyfriend, and fake friends. Like any team however, you have that one shining star that stood out above the rest. For me that star was Emily, my best friend.

And then there was Andrew. He was my shooting star. One that I never saw coming. One that I hoped became mine over the summer of my senior year.

A glimpse into a crystal ball couldn’t have prepared me for that summer, though. The summer where a letter from my mom rocked me to the core. I felt the world shake with every word I read in that letter. By the time I reached the end, my world split wide open swallowing me whole.

You can find Sketches of My Soul on Goodreads

You can buy Sketches of My Soul on Amazon

If you sign-up for the author’s newsletter you can get a free copy of Sketches, the prequel novella to Sketches of My Soul.

A faint sound of music seeped in my window. The melody called me out of bed. I pushed aside the curtains to peer out into the darkness. Andrew sat on Mrs. White’s porch swing and strummed his guitar under the soft glow of the porch light. His lips moved in song, though I couldn’t hear his voice. The distant sound of the guitar was all I caught. The temptation to throw up the window to take in more sound felt strong, but the fear that he’d notice felt even stronger.
Crouched below the window frame, hidden by the wall-space between it and floor, I cracked the window as gently as I could. It felt so lame, spying on “the boy next door.” The smooth velvet voice that sang “All of Me” made my stalking worth it, though. With my back against the wall, I hugged my knees, closed my eyes, and soaked in the words.
When the music stopped, I strained to listen for any sign of movement. After a few minutes of silence, I decided it would be safe to stand up. With the window safely shut, I started to tug the curtain back in place and sucked in my breath at the sight of Andrew standing on the porch. His eyes locked with mine. He grinned and wiggled his fingers in a playful wave.
My fingers returned the wave instinctively. Then realization hit me—there I stood, in front of the window with my Winnie-the-Pooh nightshirt on.
I flung the curtains shut and jumped for my bed but missed and landed on the floor with a thud. My elbow and knees burned from the friction of my collision with the carpet.
“Tegan? Are you okay?” My mom yelled from the hallway outside my door.
“Yes. I just slipped. I’m fine.”  I couldn’t believe he’d seen me. He probably thought I was such a loser—spying on him from my bedroom window with a Winnie-the-Pooh nightshirt on. Embarrassment poured over me in buckets painting me red. No way would I go to Mallory’s party now.

TC Booth was born and raised in a small Ohio town where she currently lives with her husband, children, and fur covered baby Sammy.

She is an award winning author who loves to read and write young adult fiction. Besides her book addiction, TC enjoys music, attending Cavs games, going to the beach, eating chocolate and spending time with her family.


GIVEAWAY!!!
There’s a tour wide giveaway during the book blitz for Sketches of my Soul. One winner will win a $10 Amazon gift card!

For a chance to win, enter the rafflecopetr below:
a Rafflecopter giveaway

Email ThisBlogThis!Share to TwitterShare to FacebookShare to Pinterest
Labels: Giveaway, Sketches of My Soul, TC Booth, YA Contemporary