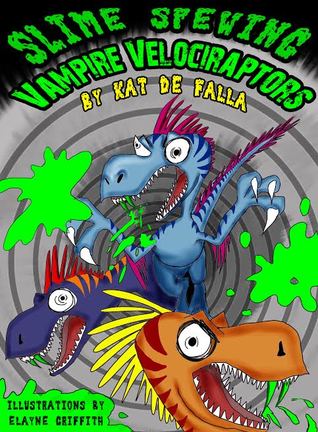 
When Pea opened a portal and the alien cat, Max Gigan, jumped through from another dimension, he certainly didn't expect the talking tomcat to stay on as a family pet. He soon learns it can come in handy to have a fur ball from an alternate universe around when his friend re-opens the portal letting in vampire velociraptors who want to slime and eat the whole city!

Pea’s dad is one of the first infected. But his dear old dad isn’t the only one. The dinosaurs escape the museum where the portal opened, and rampage through Milwaukee. As Pea's dad gets sicker, the BMX gang joins together with the feline army to corner the raptors and use them to develop an antidote. But Pea's meddling step-monster brothers threaten to ruin everything! A city wide alert goes out for the misidentified "turkeys" while Pea and his gang try to stay ahead of the hunt.

Can the kids capture the dinos and get them home before they control everyone with their vampire powers? Will Pea’s dad remain infected forever?

Join Pea and his gang in their battle against the SLIME SPEWING VAMPIRE VELOCIRAPTORS.

Dinosaurs, adventure, action, science and tons of fun--this is exactly the type of book my 12-year-old son loves to read.

Pea and his friends can't seem to stay away from trouble. Another portal opens up, and this time, raptor trouble spews out. The boys have their hands full. Pea's dad, who is trying to help out as best as he can, falls victim to the raptors and grows sick. But that isn't the only problem. The raptors get loose and cause chaos throughout the town.

I read the first book in the series, but it's not necessary to read before hitting this one. Although I do highly recommend reading that one too.

Action, fun and humor are packed into these pages, making it an engaging read. Pea and his friends are a great bunch to follow as they try their best to stop a ridiculous situation. And none of it is really their fault, which makes it so fun to cheer for them the whole way through. There are surprises around every corner, and catching these raptors definitely insures that the plot never gets anywhere near boring. It's quick paced, short at 118 pages and has tons of things especially boy readers will adore.

The gem in this tale, however, is the science. Adventure seeps from every page, but so do all sorts of science facts. The raptors are presented in a more true to science form as well as their slimy abilities. Not only are their wonderful facts but readers will also discover how to make build/create several things themselves. But the book never feels like a science lesson because  it isn't. It's just drops a few facts along the way.

Summed up, this is a fun read for especially boys and reluctant readers. Not only will they love the adventure but enjoy learning something too.

Max was pacing on the back stoop. “I think we have a problem.”

Pea slumped down on the concrete step beside Max. They were too late.

“Pea’s dad?” Paco asked, parking their bikes along the garage wall. “And the others?”

“On my planet, we’ve never seen their venom do much damage because we, are a species have extensive body hair cover.”

“Fur,” Pea said, petting his friend who was about to deliver the worst possible news. He braced himself.

“Your father—while still alive—”
“Alive?” Pea jumped up and ran in the house. Not a light was on and there was no sign of the others. Paco followed him inside. No matter what was wrong, at least he was alive!
From his dad’s open bedroom door, a tennis ball was thrown, bringing the boys to a halt. A raptor with a collar around its neck ran from the bedroom, collected the ball in its mouth and returned into the darkness of Pea’s dad’s bedroom. Was it playing fetch?
“What…what in the world?” Paco was at a loss for words.
The ball came flying out the bedroom again. “Go get it, Stella!” The little raptor hopped down the hall, tail wagging and collected the ball once again.
“He named it?” Paco whispered to Pea. “That’s crazy, like something our science teacher Mrs. Heinzel would make us do.” Pressing themselves against the wall, Paco put his mewing kitten down on the floor. “Find Max, stay with him.”
“What do you think? Mind control? Or possession? Or something worse?” Pea led the way as they inched down the hallway, moving closer to the bedroom.
“I can hear you,” Pea’s dad said. “How are Rayzor— with a ‘Y’—and Phlegm? I named all of them. Deal with it.” The ball hurled past them a third time. Stella paid them no attention and retrieved for her…master?
Half expecting to find half-eaten bodies and blood smeared on every door, Pea braced himself as he pushed open his dad’s bedroom door. “Dad?” he called.


The blinds were all drawn and the raptor was snuggled next to Pea’s dad in bed. His dad gave them a broad smile. Fangs! He had fangs!

Author Kat de Falla was born and raised in Milwaukee, Wisconsin where she learned to roller skate, ride a banana seat bike, and love Shakespeare thanks to her high school English teacher.

Four years at the UW-Madison wasn't enough, so she returned to her beloved college town for her Doctor of Pharmacy degree and is happily employed as a retail pharmacist where she fills prescriptions and chats with her patients.

She is married to her soul mate, composer Lee de Falla and raising four kids together ala the Brady Bunch.

Kat de Falla is giving away one ebook copy of the first book in this series, FLYING MUTANT ZOMBIE RATS! To enter your chance to win one copy, please leave a comment below as well as your email address so that you can be notified in case of a win. One winner will be randomly chosen from all comments. The winner has 48 hours to respond or the prize will be forfeited. The giveaway ends at midnight EST on July 25th. The winner will be announced on July 26th in the comments below. 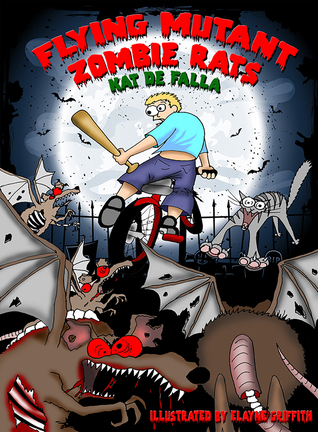