Review: Your Heart My Sky by Margarita Engle

April is also known as National Poetry Month, and there's no way I'm going to let that slide by without presenting at least a couple wonderful poetry reads on Bookworm for Kids. Today, I have two (yep, keep your eyes open for the second one popping up later today!)
This first one didn't only catch my eye due to the form of writing but also the topic:  el periodo especial en tiempos de paz. Starting in 1991, Cuba entered a horrible period of starvation and economic disaster. This book takes a look at a 14-year-old girl and 15-year-old boy, who do their best to survive before deciding to risk their lives and flee. Combine this heavily emotional period with poetry, and it was one I couldn't pass up. 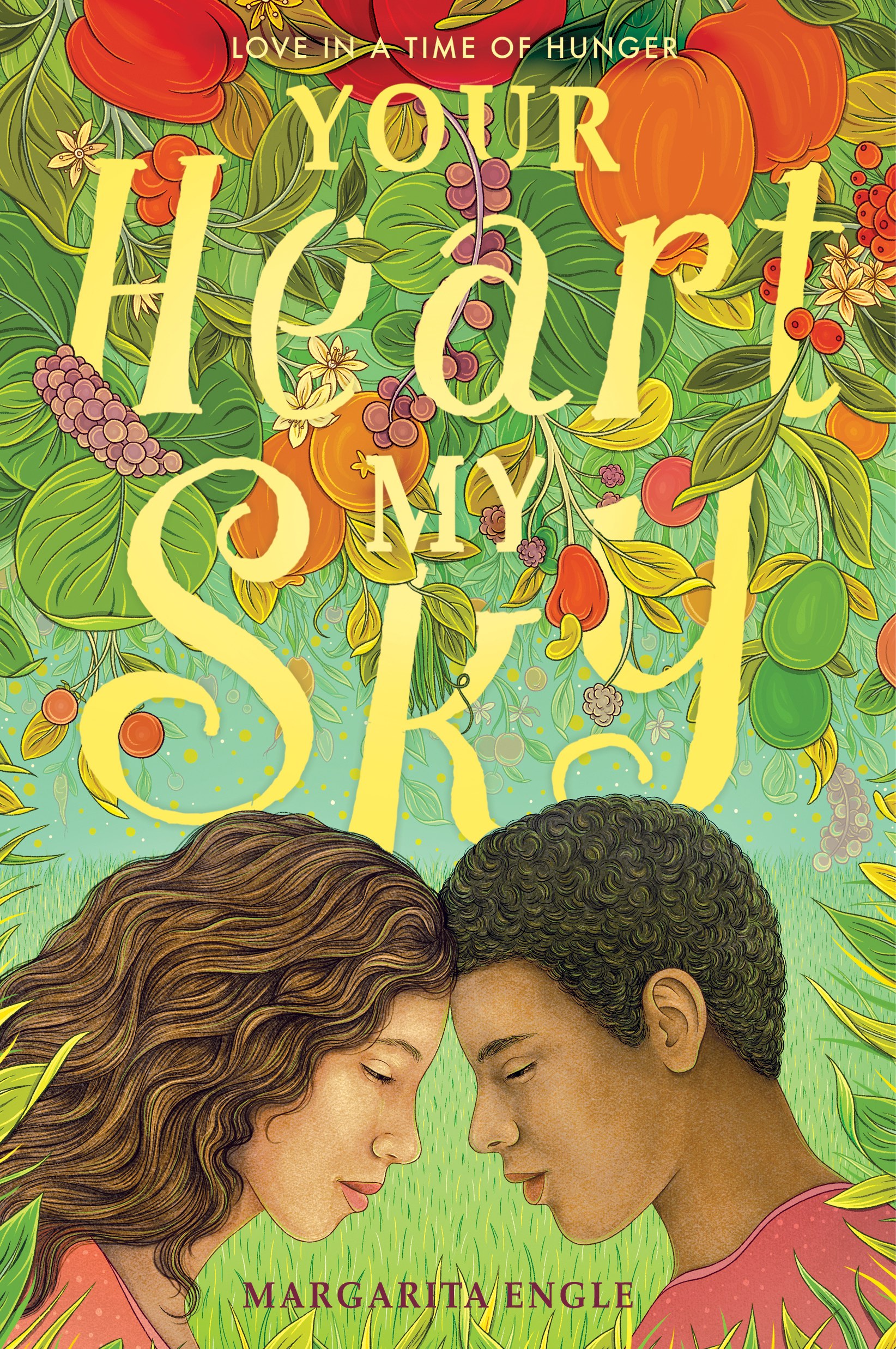 YOUR HEART MY SKY
Love in a Time of Hunger
by Margarita Engle
Atheneum Books
Young Adult Historical Fiction / Poetry
released on March 23
224 pages
Acclaimed author Margarita Engle tells a painful, poignant story of love in a time of hunger inspired by her own family’s struggles during a dark period in Cuba’s history.The people of Cuba are living in el periodo especial en tiempos de paz—the special period in times of peace. That’s what the government insists that this era must be called, but the reality behind these words is starvation.Liana is struggling to find enough to eat. Yet hunger has also made her brave: she finds the courage to skip a summer of so-called volunteer farm labor, even though she risks government retribution. Nearby, a quiet, handsome boy named Amado also refuses to comply, so he wanders alone, trying to discover rare sources of food.A chance encounter with an enigmatic dog brings Liana and Amado together. United in hope and hunger, they soon discover that their feelings for each other run deep. Love can feed their souls and hearts—but is it enough to withstand el periodo especial?
BOOK DEPOSITORY   /    AMAZON   /    B&N    /    KOBO    /    GOODREADS
BOOK BLINK
* poetry
* set in the 1990's in Cuba
* centers around hunger and romance
* a pinch of magical realism
* very emotional read
MY TIDBITS
Beautiful poetry allows the raking hardship of starvation to mix with the wonder of love and form a captivating, bitter-sweet tale.
Liana and Amado both struggle to find anything edible and survive as the world around them collapses into poverty and starvation. Both are determined to defy the government's requirements and choose not to attend the 'voluntary' summer-camp, which has teens slaving away all Summer long on the sugar plantations. By refusing to go, they've lost their chance at a bright future. When a stray dog brings them together, a romance begins, and with it, the magic of true love.
This one is written from three points of view: Liana, Amado, and the Singing Dog. It begins with Liana as she decides not to attend the camp and is forced to search the streets and beach for anything she can find to eat. Amado comes in a little later, also refusing to attend camp but with a slightly more political angle, since his older brother already sits in prison. The dog settles in as Liana's companion but soon gains a slightly mythical air as its very conscious purpose as a match-maker comes into play. Each chapter is kept very short (1-2 pages), and each one begins with the name the character's name to avoid any confusion.
I'd heard about this time period in Cuba but really am not extremely well-versed. So, this was intriguing, in that respect. Since this tale isn't about the background of the situation, the facts and reasons for the depression are only briefly mentioned. So, anyone wanting to know more or unfamiliar with the situation, will have to do research on their own. That said, these pages dive into the emotional end of things and the budding romance. Both characters are very fleshed out with their feelings, and both are easy to like right away. The poetry form really brings this aspect to life and allows the pain, hunger, desperation, hope, dreams and love to come across well. It's an easy read and no problem to sink into.
While the setting and characters are brought across expertly on the emotional end, the plot is more light and stretches in the direction of hunger and romance... which is more than enough for this read and very well done. But because of this, there are many openings and holes in the way of setting descriptions, background, and surrounding characters. But, as said, this also isn't the point of this book. Instead, one message comes across loud and clear as the two battle with the rights and wrongs when simple survival is at stake, and that is the amazing power of love.
And here she is...
Margarita Engle is the Cuban American author of many books including the verse novels Your Heart, My Sky; With a Star in My Hand; The Surrender Tree, a Newbery Honor winner; and The Lightning Dreamer. Her verse memoirs include Soaring Earth and Enchanted Air, which received the Pura Belpré Award, a Walter Dean Myers Award Honor, and was a finalist for the YALSA Award for Excellence in Nonfiction, among others. Her picture books include Drum Dream Girl; Dancing Hands; and The Flying Girl. Visit her at MargaritaEngle.com.
on April 19, 2021