Review: The Hero of Numbani by Nicky Drayden

Hey, gamers and action fans! Today's book is something just for you. This one originates from the ever-so-popular Overwatch game....and I'd heard it was actually very good. Yes, I'm a bit slow this time with this book. This one was released last year (Not an ARC???!!!!!). But hey, a good read is always a good read! Right?
I loved the cover on this one, and I know video game books do catch middle graders' attentions, especially reluctant readers. Plus, as said, I do like the cover. Doesn't that girl scream attitude? Add that she builds robots and is into circuits and all that stuff...and well, yeah. This one definitely hit my 'must be reviewed' list.
Extra Info:
After a tad bit of research, I've also discovered that the publisher, Scholastic, is releasing another Overwatch novel on June 1st, Deadlock Rebels. This one, however, isn't for the middle grade audience but steers toward young adults. So, older readers and fans, you might want to take a peek at that one, too.
Now, let's see if I enjoyed this one, and let you guys know what it's all about. 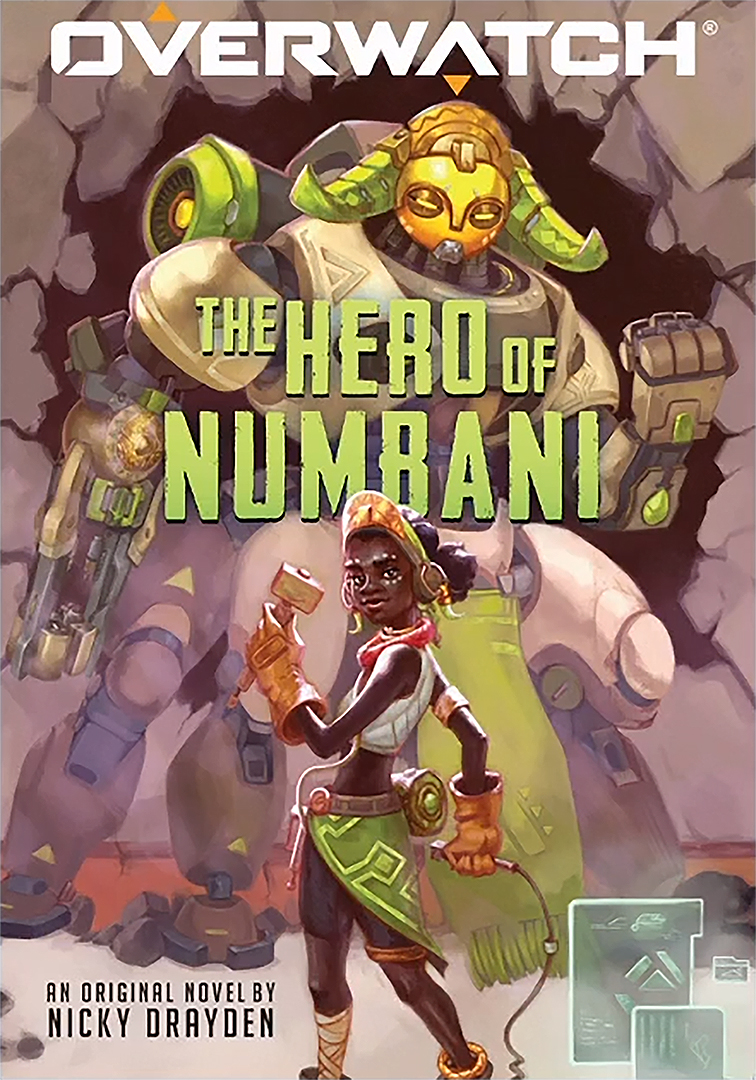 THE HERO OF NUMBANI
by Nicky Drayden
Scholastic
Middle Grade Science Fiction
304 pages
ages 8 to 12
In the technologically advanced African city of Numbani, in the not-so-distant future, humans live in harmony with humanoid robots known as omnics. But when a terrorist tries to shatter that unity, a hero named Efi Oladele rises!Efi has been making robots since she was little-machines to better her community and improve people's lives. But after she witnesses Doomfist's catastrophic attack on the city's OR15 security bots, Efi feels the call to build something greater: a true guardian of Numbani.While Doomfist sows discord between humans and omnics, Efi engineers an intelligent and compassionate robot, Orisa, named after the powerful spirits who guide her people. Orisa has a lot to learn before she's ready to defeat Doomfist, but Efi has some learning to do, too, especially when it comes to building-and being-a hero. With Doomfist rallying his forces, and the military powerless to stop him, can Efi mold Orisa into the hero of Numbani before it's too late?This action-packed novel features the fan-favorite characters Efi, Orisa, Doomfist, and Lúcio in an all-new, original story straight from the minds of the Overwatch game team and critically acclaimed author Nicky Drayden!
GOODREADS    /    AMAZON   /   B&N    /     KOBO     /     BOOK DEPOSITORY
BOOK BLINK
* written by award winning author
* inspired by Overwatch video game
* strong female character / engineering interests
* action pure
* set in futuristic version of Nigeria
MY TIDBITS
Firstly, I am not a fan of Overwatch and hadn't heard of it before reading this book. For some reason, it's not a game my kids have ever gotten into...don't get that wrong because they do have their games they love. But somehow, this one slipped through the cracks. (Go figure?) So, I went at this as a gamer-book fan but knowing nothing about this particular one.
I was really surprised how well this is written and have no doubt fans of the game will love every page.
The main character bounces off the pages right away with tons of personality, determination, and quirkiness. Her desire to get her robots right was already cute, but she's packed with fierce determination and a heart of gold. And she doesn't go the adventure alone. There are lots of sub-characters along the way, and these were just as fun and intriguing as she is. They made for a fun read.
The plot is engaging and keeps things rolling at a very fast pace. Some things are a bit predictable, but many are not. There's tension, danger, excitement, humor and everything needed to get lost in the pages. I have no idea how much is based on the real game...or whether it's not, but it was entertaining. There was also enough depth and background to allow the world to gain a bit of richness. So, I didn't need to know the game to enjoy it, either.
Then, there are the aspects which, obviously, seemed to hang on the game. While this did add a bit of clunkiness as a 'normal' read, knowing the origins kept it from becoming overly irritating. All in all, this is a fun read. If you don't know the game, you'll want to after reading this. And if you are an Overwatch fan, you'll want to pick this one up, anyway. It's fun and well-written for middle graders (and maybe, even those just a pinch older who love to pretend).
And here she is...
Nicky Drayden is a systems analyst who dabbles in prose when she’s not buried in code. She resides in Austin, Texas, where being weird is highly encouraged, if not required. Her award-winning novel The Prey of Gods is set in a futuristic South Africa brimming with demigods, robots, and hallucinogenic hijinks. See more of her work at nickydrayden.com or catch her on Twitter @nickydrayden.
on April 27, 2021

Email ThisBlogThis!Share to TwitterShare to FacebookShare to Pinterest
Labels: Nicky Drayden, Overwatch, The Hero of Numbani