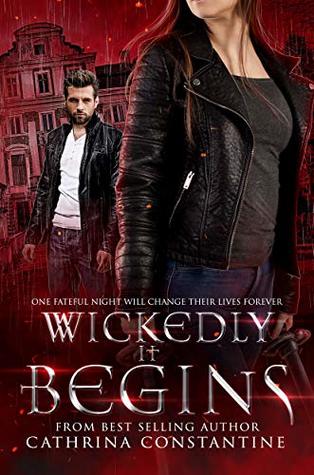 WICKEDLY IT BEGINS
The Wickedly, 0.5
by Cathrina Constantine
CHBB Publishing
YA Paranormal
313 pages

One fateful night will change their lives forever.Seeley is born a hunter. God’s warrior. She’s endowed with inexplicable gifts to slay creatures and demons threatening humans. Alongside her guardian angel, Ezekiel, she will face unimaginable trials and tribulations.Jack Chase was born an orphan. Kicked from foster home to foster home, he lands with a couple who worships Satan. He succumbs to their diabolical rituals, and learns he also has extraordinary talents. Wealthy, Asa Trebane, and leader of the Black Order of the Cult locates this teenager he’s heard much about. He takes Jack under his wing and into his home.A mysterious pull leads Jack to Seeley. A pull neither of them can resist.

I have read the first book in this series, enjoyed it quite a bit, and was thrilled when this one appeared as a lead-in to the series. It not only was as exciting and engaging as I'd hoped but gave wonderful extra insight when revisiting book one.

Seeley is a demon hunter, and since as long as she can remember has been trained and mentored by her guardian angel. Now, she's about to graduate high school—a 'normal' life she's never felt that she's really a part of—and is still unclear what she wants in life, since she is a demon hunter through and through. During her usual visits to the local church, she runs into the mysterious Jack. Although she's never had the slightest interest in guys, this one is different. Not only is she drawn to him, it's a pull she can't refuse. But he's harboring more than a few secrets.

This book packs as much action, romance and danger as the other book I've read and was one I couldn't put down. Seeley is easy to root for and like. She does have amazing demon fighting skills and harbors more than a few other talents, but she's still unsure and, by no means, always comes out on top of every battle. Her uncertainty for usual human life around her adds a nice twist and is understandable. She has a lot to learn.

I really enjoy the sense of friendship and family in this book. While Seeley has to keep a lot of secrets from her parents, they know about her calling to a certain degree and support her in so much as they can. Even the priest stands at her side with loving guidance or warnings. As for her guardian angel...well, after reading this book, I think everyone will wish they had one just like him. His loyalty and love is warming, and gives Seeley an inspiring foundation.

Then, we have the romance, which is a definite tug-of-war. There is the 'love at first sight', but it works since this couple has a huge, upward battle. It's clear that even if this relationship works out, it's never going to be sunshine and roses. If these two want to get together, it's a true battle of good versus evil. But this one even has more behind it, and that makes it a true treat for the rest of the series.

And action? There's lots of that. The monsters never relax as everything from zombies to vampires to demons to hydras and beyond lurk in the shadows. Seeley has her hands full at every twist and turn. Add the wonderful, religious background to this entire thing, and it's simply a good read.