Review: This is the Path the Wolf Took by Laura Farina 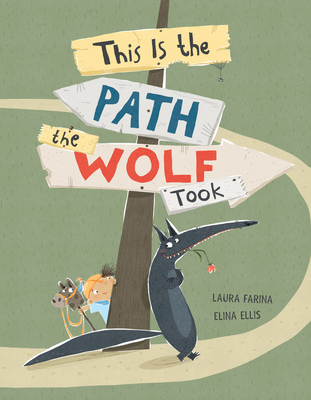 A boy's little sister doesn't like the way he improvises when he tells tales, in this funny and bighearted tale about what makes a story good.

The stories Gabe ?reads? to his little sister start out sounding familiar --- a red-caped girl on her way to Grandma's house meets a wolf in the woods --- but then, just in the nick of time, Sir Gabriel swoops in to save the day. His sister points out that's not how the story is supposed to go. The boy says his way is better: ?Nothing bad happens in my story.? But when his sister stops listening, the boy realizes he needs to reconsider. Are his stories boring? Why does it seem like there's always something missing?

Laura Farina's funny and empathetic tale explores why a good story is never made up of only good things. Many young children want a story to be exciting, but they don't want anything scary or bad to happen. This picture book shows how a brief period of being afraid or sad is necessary to make a story worth hearing. It makes for a great discussion starter and works well for loads of language arts applications, including writing skills, elements of a story, and fairy tales or other literary genres. With its playful humor, endearing sibling relationship and high-energy illustrations by Elina Ellis, this book also makes an entertaining read-aloud.

With a nod toward The Tale of the Three Pigs and Little Red Riding Hood, this book heads into the tug-a-war of sibling relationships and a love for ice cream.

This book was not what I expected. After reading the blurb, I was pretty sure this one would be about a brother, who takes the wolf of the three pigs and Riding Hood and turns him into a pretty vicious beast. I mean, that's what my boys would have done to irritate their sisters. But this book surprises and lets the older brother head in a unique direction, which lies in imaginative role play and somewhat, heroic moments. Kind of. (I don't want to give the story away, though)

I'll start with the good end of this tale and hit right into the illustrations. These are very well done, draw young listeners in, and keep them there. The imagination comes to life as much as the personalities of the brother and sister. It was simply fun to flip through the book just to take the adventure the picture provide. It's humorous and will even be familiar to those who have siblings.

The story itself was more difficult. Firstly, listeners will have to have a pretty good handle on both of the fairy tales I mentioned above to even have a chance to keep up with what goes on. But this much only hits maybe half of the book. After that, things get confusing, especially in the sense of why they happen. I was lost, and my kids were lost. But it did have dragons and ice cream and a few funny scenes. But on this last half, it was the illustrations which kept us from putting it down.

I think the message centered around sibling relationships and a brother realizing that his way of doing things might not be best. So, he tries to compromise in his own way and learns to veer more toward his sister's interests(?). Maybe?

But this is still a book I could see kids finding interesting....mostly thanks to the illustrations. Especially as a read-aloud.

Email ThisBlogThis!Share to TwitterShare to FacebookShare to Pinterest
Labels: Elina Ellis, Laura Farina, This is the Path the Wolf Took