Review: The Warden and The Wolf King by Andrew Peterson

The book I have today is a re-release of what many have claimed is an amazing fantasy series for middle graders. While I didn't pick up on this one until now and am starting with book 4, I figure 'better late than never'! Especially since it has an amazing cover and even more amazing illustrations throughout the pages. 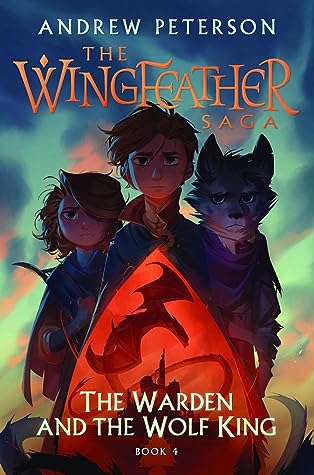 All winter long, people in the Green Hollows have prepared for a final battle with Gnag the Nameless and the Fangs of Dang. Janner, Kalmar, and Leeli—Throne Warden, Wolf King, and Song Maiden of Anniera—are ready and willing to fight alongside the Hollowsfolk, but when the Fangs make the first move and invade Ban Rona, the children are separated. Janner is alone and lost in the hills; Leeli is fighting the Fangs from the rooftops of the city; and Kalmar, who carries a terrible secret, is on a course for the Deeps of Throg. Meanwhile in Skree, Sara Cobbler and Maraly Weaver care for the broken Artham Wingfeather as Fangs muster for battle across the MightyRiver Blapp.
Sea dragons lurk in the waters. Wicked Stranders crawl through the burrows. Ridgerunners and trolls prowl the land. Cloven haunt the forest. Monsters and Fangs and villains lie between the children and their only hope of victory—in the epic conclusion of The Wingfeather Saga.

Fantasy friends be prepared because this book takes you on an adventure not easy to forget.

Janner, Kalmar, and Leeli might be young, but they are more the ready to take up their roles and fight to save Fang of Dang. Not only is it difficult to keep the various groups united, but they face untold danger themselves. Especially when they get separated and need to fight as well as they can. But the monsters are fierce and the battle seemingly impossible.

I did not read the first books in this series, which was a mistake. While it wasn't too much of a problem to get into this book, the background information definitely would have helped. Plus, this book was so amazing that I'm not sad I didn't start with book one.

This is a pure fantasy world, chucked full of imagination. In other words, the world building is very well done and packs tons of surprises along with unique characters and settings. The author lets his fantasy take flight and takes the reader with him. It was a delight to experience all the monsters, magic, warriors, and even the smaller things like food and landscape. And with all this, the story never slows down.

Adventure ranks high as does the danger. This tale twists and turns and squirms, making sure it's a read that's hard to put down. When I saw the word count on this one, I did swallow, since it's quite a chunk for many young readers. But this tale doesn't squander the page space. To break things up, there are illustrations scattered through-out. But even then, this tale is grabbing and holds tons of surprises along the way.

My favorite aspect of this book is how it's written. While the world building is rich and then plotting sits tight and well-woven, it's the characters that make this shine. These are kids, and the author doesn't forget that. Even if they are thrown into adventures, which most adults would edge away from, they still act like kids. And speak like kids. And think like kids. They also have a wonderful bond of friendship and sibling loyalty.

This is not only a fun read and one that keeps the reader at the edge of their seat, but it also has heart. And the ending...well, it really hits home. I'm planning on gifting this series to a fantasy lover because I'm sure they'll enjoy it quite a bit.
on August 27, 2020

Email ThisBlogThis!Share to TwitterShare to FacebookShare to Pinterest
Labels: Andrew Peterson, The Warden and the Wolf King, The Wingfeather Saga