Often, it seems that fiction is the only thing that hits Bookworm for Kids. So, when I stumble across something a bit more true to life, it's always a treat. The one I'm presenting today is especially interesting and is sure to inspire! 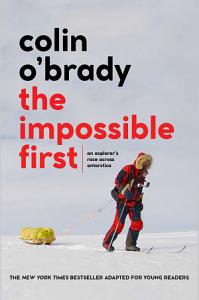 
In this Young Readers Edition of Impossible First—perfect for fans of My Shot by Elena Delle Donne and Shaken by Tim Tebow—Colin O’Brady vividly recounts his fifty-four-day, unsupported, record-shattering solo crossing of Antarctica using every ounce of his strength, years of training, and sheer force of will.
Prior to December 2018, no individual had ever crossed the unforgiving ice of Antarctica alone, unaided and unsupported. Only one day into what would be a 932-mile journey, O’Brady judged what he was trying to do was impossible.
Alone with his thoughts, O’Brady traveled back in his memory to the events that led him to this pivotal moment. For a while, it had seemed that nothing would stop him: He’d climbed every high mountain peak, bagged every endurance challenge (the Seven Summits, including Everest…record sprints to both Poles…the highest peaks in all fifty US states)—all after recovering from a freak burning accident that doctors said would end his athletic career. But the prize that had eluded him was success on this moment forbidding continent of all.
Impossible First is a raw, thought-provoking adventure memoir, one that reveals how anyone can set goals, overcome obstacles, and push the limits of what’s possible.

This is an engaging read about a man's determination to reach his goals—one that is sure to inspire and offer hope to young dreamers.

Colin O'Brady is known for breaking records and reaching beyond the borders of what people have attempted in the past. This book covers his journey across Antarctica as he crossed over 900 miles alone, pulling everything he needed to survive on a sled behind him.

I'll admit, I'm not a huge fan of autobiographies and especially not one written by modern day people over their accomplishments, since many of these claim to be written for young readers but completely miss the target. Simply said, I often have the feeling these books aim for money making and completely ignore their target audience. This book, at least, is written in a way which will capture young adults and offers them inspiration to give their everything if they really want to achieve a goal.

The book starts with the landing and an interesting back-and-forth with the man Colin is 'competing' against. It stirred up a little of the competition feeling, added a tiny bit of tension and grabbed. And it did more. It not only lays the starting scene, but also shows that everyone has insecurities and is nervous before starting out. Even weathered adventurers. But this message came across so well-woven into the moment, and that's how this book is. It allows the reader to really dig deep into Colin and see themselves, since he's as human as they are.

While there are tense moments during this journey and situations which have the reader wondering how the author will make it through, traveling that long alone in a fairly barren landscape isn't always 'exciting'. The author, however, uses this to weave in memories of his own past to help drive the situation and his own feelings home. Some of these are easy for young readers to identify with, others not so much. I am torn on these moments. Some had me invested, while others I found myself skipping through to get back to the 'ice'. These flash-backs did take up a nice chunk of the book, making it as much a read about the author's past as his adventure. But then, it also allows the reader to feel more personal to the author and get a better handle on where he's coming from.

I do see young readers (mostly YA) enjoying this one, and despite sliding through some sections, did enjoy reading the rest quite a bit. So, I'm giving this one a big thumbs up.

Colin O’Brady is a world record holding explorer whose feats include the world’s first solo, unsupported, and human-powered crossing of Antarctica, speed records for the Explorers Grand Slam and the Seven Summits, and reaching the highest point in all fifty US states in a record-breaking twenty-one days. He and a crew became the world’s first team to row a boat across the treacherous Drake Passage from South America to Antarctica. A Yale graduate, he is a renowned speaker and expert on mindset whose work has inspired millions. Through his nonprofit Beyond 7/2, he uses his expeditions to motivate young people to live active, healthy lives and pursue their biggest dreams. Native to the Pacific Northwest, he now lives in Jackson Hole, Wyoming, with his wife, Jenna Besaw, and dog, Jack.