I'm very excited to let get this book up here on Bookworm for Kids. I read it this last week and couldn't put it down. It was one of the better books I've read this year. But you can read my thoughts below.


In a city covered in ice and ruin, a group of magicians face off in a daring game of magical feats to find the next headliner of the Conquering Circus, only to find themselves under the threat of an unseen danger striking behind the scenes.

As each act becomes more and more risky and the number of missing magicians piles up, three are forced to reckon with their secrets before the darkness comes for them next.

The Star: Kallia, a powerful showgirl out to prove she’s the best no matter the cost

The Master: Jack, the enigmatic keeper of the club, and more than one lie told

The Magician: Demarco, the brooding judge with a dark past he can no longer hide

Where Dreams Descend is the startling and romantic first book in Janella Angeles’ debut Kingdom of Cards fantasy duology where magic is both celebrated and feared, and no heart is left unscathed.

Magic, mystery, elaborate shows, a pinch of romance, and an edge of luring darkness make this into an exciting read, which doesn't let go even at the last page.

Kallia is the showgirl at an unique gambling club beyond a mysterious forest. She was found abandoned in the forest and taken in by the owner years ago. Now, the owner's son, Jack, resides over the club and is known as The Master, not only for his position, but his talent in magic is unprecedented. And he's been teaching Kallia, who also has an extraordinary affinity for magic, for years. Despite Kallia's luxurious life, she never is allowed to go beyond the club's outer walls. Night after night, she sits on the roof of the greenhouse and stares at the town on the other side of the dangerous forest, wishing she could find a way to escape her golden cage.

And that's where the story starts. Even at almost 450 pages, this book is packed with plot...one that doesn't nearly end even by the end of the book. Kallia is a character to love. She might be trapped, but she has a personality as sharp as her wit. Her desire to flee is more than understandable, and her attitude when she leaves her cage is so strong, it's hard to decide whether she'll be to love or hate. But her heart is true gold and it shines through at every twist and turn. Her attitude is an armor she desperately needs in this very deadly game.

Kallia is up against many things. Obviously, she has no clue about her past, but interestingly enough, this isn't really something that concerns her or even takes much of this book. She's concentrated on her future and escape. Jack, the Master she runs from, is more than a force to be dealt with, not only because his power far surpasses everyone else. He's dark, is a secret in every shape and form, and yet, he dances on a strange edge of whether he is truly to hate (who could blame Kallia for that?) or maybe not. It's a rich tension, which doesn't even come close to being resolved by the end of this first book.

Then, there's another magician, a young judge in the magical contest Kallia later finds herself in. He's got all the makings to be her romantic interest, but has secrets and problems of his own. This one holds a huge shocker at the end and had me wondering if there will be romance in this direction after all. (But it's hard to believe there isn't, either!) Again, it's tension pure.

That's only the beginning of a very colorful stage of many characters, big and small. Each one dances their own tune, and each leaves an impression. There's so much going on and so much mystery that it makes a spectacular show. After all, that's what these characters are mostly about—amazing an audience with illusions coated beyond truth and lies. And the delicious darkness which lurks in the shadows guarantees that this show has only begun.

Yep, I can't wait to get my hands on book two when it finally comes out. 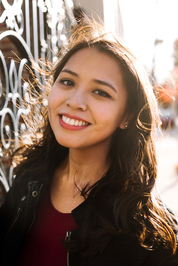 JANELLA ANGELES is a Filipino-American author who got her start in writing through consuming glorious amounts of fanfiction at a young age—which eventually led to penning a few of her own, and later on, creating original stories from her imagination. A lifelong lover of books, she's lucky enough to be working in the business of publishing them on top of writing them. She currently resides in Massachusetts, where she's most likely to be found listening to musicals on repeat and daydreaming too much for her own good. Where Dreams Descend is her first book.