Review: Rock by Rock: The Fantastical Garden of Nek Chand by Jennifer Bradbury

Happy Earth Day! After hitting the fun and out-of-this-world yesterday, today's review slides into the non-fiction direction and takes a glance at the accomplishments of a man, who viewed the world around him a bit differently. This one takes place in India and introduces young readers to an inspiring, real life tale, which few know little about (always one of my favorites).
But I'm not going to babble anymore... 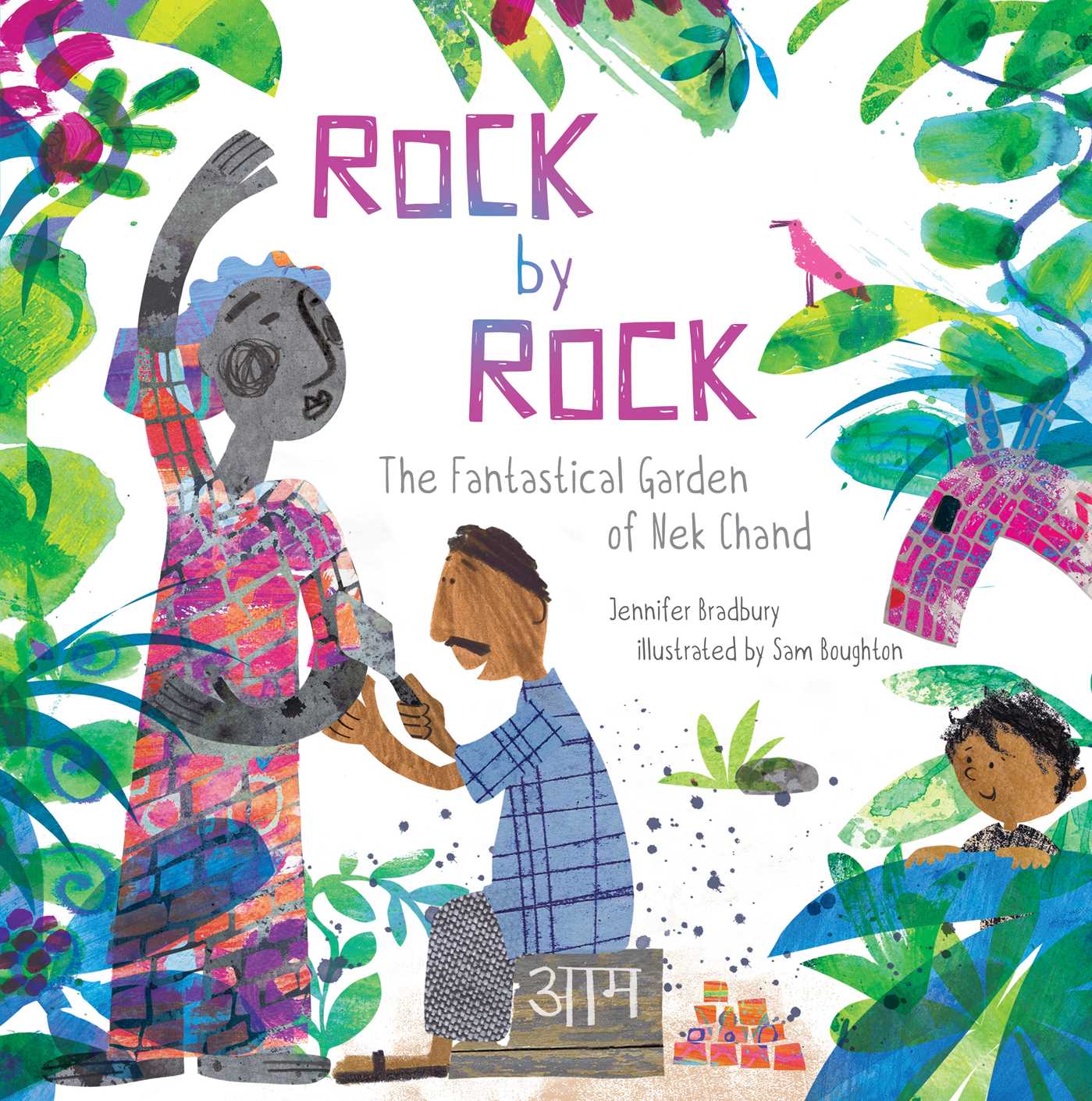 ROCK BY ROCK
The Fantastical Garden of Nek Chand
by Jennifer Bradbury
Illustrated by Sam Boughton
Caitlyn Dlouhy Books
Picture Book
48 pages
ages 4 to 8
This luminous picture book tells the fascinating true story of artist Nek Chand and how his secret art project—hidden away in a jungle—became one of India’s most treasured wonders, second only to the Taj Mahal.In the bustle of the busy streets of Chandigarh, India, Nek Chand saw something no one else did. Where others saw rocks and stones, Nek saw the boyhood village he missed so dearly. Where others saw broken plates and glass, Nek saw laughing men. And where others saw trash, Nek saw beauty.Nek Chand’s incredible rock garden, built from stone and scraps and concrete, began as a way for him to express his long-felt grief at having to leave his boyhood village due to the violence caused by the partition of India. What began as a secret and personal (not to mention initially illegal) project became so much more, not only to Nek but to all of India.
GOODREADS   /   AMAZON   /   B&N   /    KOBO    /    BOOK DEPOSITORY
BOOK BLINK
* brightly illustrated
* takes place in India
* presents true events
* inspirational
MY TIDBITS
I love reading about true events, especially when they're presented in well-done, picture book format and suitable for younger readers. And this book fits both categories nicely.
Nek Chand lived in Pakistan but ended up moving to India due to religious reasons. His heart, however, never left his small hometown. One day, while walking in a forest near the city, he runs into a clearing and finds himself remembering his younger days. Soon, he's bringing unused building materials from his job and other 'garbage' he finds on the streets, to construct all sorts of statues and things. His hobby grows until a garden forms. But his secret is soon discovered, and his happy place is threatened to be torn down.
I'd never heard of Nek Chand before reading this and was glad to get to know all about him and his garden. Since many young listeners won't be overly familiar with India, the book starts out with some very light, quick background information before diving into Nek's story. The writing is probably more for ages 5 to 8, but the vocabulary as well as the amount of text is at a level this age group will easily understand. Not only the building of Nek's background is presented, but also the difficulties which later arise as it's almost destroyed. Even this is shown in an age appropriate manner. The way the problem is solved is inspiring, not only because it encourages young listeners to perhaps chase their own dreams, but shows that supporting others does make a difference.
The illustrations in this one are bright and bold with just the right amount of artistic flair. India's culture and people are presented in the pictures, allowing young listeners to learn more about the country and people simply by gazing at the pictures. There is also a more detailed explanation surrounding Nek and his garden at the end of the book.
This is a lovely book, not only as a read aloud between adults and a child, but also works well for group settings and those wanting to learn a little bit more about India.
And here they are...
The Author...
Jennifer Bradbury is the author of the middle grade novel River Runs Deep and of several critically acclaimed young adult novels, including A Moment Comes, Wrapped, and her debut, Shift—which Kirkus Reviews called “fresh, absorbing, compelling” in a starred review. Shift was picked as an ALA and a School Library Journal Best Book for Young Adults and is also on numerous state reading lists. She taught in Chandigarh, India, and teachers still in Burlington, Washington, where she lives with her family.
The Illustrator...
Sam Boughton is an award-winning artist based in the UK. She graduated with a bachelor’s in illustration from Bristol UWE then went on to be awarded a distinction for her master’s in illustration from the Cambridge School of Art. In addition to holding solo exhibitions of her paintings, Sam illustrates and writes picture books. She works mainly in watercolor with an added element of collage. Visit her online at SamBoughton.co.uk.
on April 22, 2021