Review:Girl With Three Eyes by Priya Ardis with Giveaway! 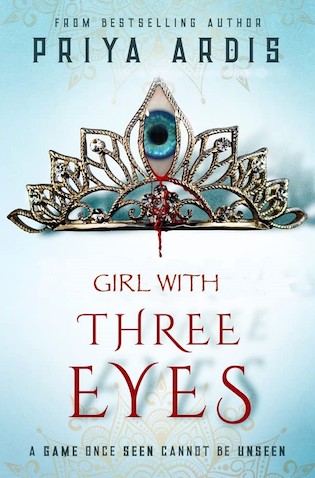 
She would hate her third eye less if it actually gave her special powers. When her secret is threatened, she may be the only one who can save the kingdom.

Sixteen-year-old Kira puts on a show about having empathic abilities, but she miraculously wakes a highborn boy from a coma after a near-fatal accident on mountainous slopes. When his father threatens to expose her “magic” to the queen unless she attends the kingdom’s most elite academy as a bodyguard.
Soon, she’s immersed in a strange new life—one of being a simple student trying out for the school’s skyboarding team. Her fake life becomes the life she’s always wanted, but Kira cannot escape who she truly is. And as a sinister foe lurks closer than she suspects…
Will she risk her freedom to develop the vision to unmask a killer before the crown falls?
Girl with Three Eyes is a young adult fantasy series. If you like strong female protagonists, futuristic fairy tales, and epic tournaments, then you’ll love Priya Ardis’s heart-racing adventure.

With more than a couple refreshing twists, this is a grabbing start to what promises to be a delightful series.

Sixteen-year-old Kira is the outcast of her village. Not only is her father a drunkard and her mother deceased, but she's known to be a bit different...although no one really knows how. Kira hides a third eye on her forehead underneath a head band and wishes she'd never been born with such a curse. While skyboarding, she saves a boy from sure death, but soon finds him in coma back at her home. His father begs for her to save him, after hearing about her strange capabilities. To her surprise, it works. And that is her doom. With her father being held, she agrees to become a body guard for the boy, but little does she know the true plot she's about to stumble upon.

There are so many original and unique aspects of this tale, and yet, there are many familiar things as well. The idea of Kira having a third eye gives her a character with an intriguing twist. Not only did I love the tap at the beliefs of a different culture, but it made her interesting to get to know. It was easy to understand why she'd dislike her gift and also simple to see why she wouldn't necessarily fit in. Then there was skyboarding. Kira's hobby reminds a bit of snowboarding, but with a few different twists. I can't remember reading anything like this in a fantasy novel before and really enjoyed it. It also fit well with Kira's personality and kept the entire 'school' theme from going overboard.

While the tale starts out in a small cabin in a forest (a wonderful dive into a rich fantasy), it soon spins into a more cliche situation as she heads off to an elite school with the saved boy to protect him. There's also a bit of a rag to riches theme, but only a hint. This scene change took a little longer for me to warm up to, since it entailed the usual bullying, mean girls, and such. But then, the story saves itself by adding other new aspects like skyboarding competitions and spies with secret plots of treason. It's a mix full of tension and definitely keeps the pages turning until the end.

There's also friendship and romance and family. Kira might be discovering her powers, but she doesn't really have to do anything completely on her own as her newfound friends are right at her side. She also has a couple possible romance interests going on, each bordering on friendship more than anything sure (which I appreciate).

This is an exciting begin to what promises to be an even more intriguing series. It does seem to lean toward the younger side of YA and I think tweens would really enjoy this one, too. At times, I did find myself skipping a few paragraphs and a few 'surprises' were a little predictable, but I still enjoyed the tale quite a bit and am definitely looking forward to seeing where book two will take Kira. Because there is the promise of so much more to come! 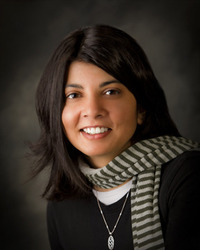 Priya Ardis writes Blood&Treasure fantasy romances which include coming of age, bad boys, globe-trotting, and a spoonful of sassy banter.
She loves books of all kinds–but especially the ones that ensnare you and let your chai go cold. Her novels come from a childhood of playing too much She-Ra and watching too much Spock. She started her first book at sixteen, writing in notebooks on long train rides during a hot summer vacation. Her favorite Arthurian is the Lady of Shalott by Lord Tennyson.
What does she like to read? Books with fantasy and magic with a cool heroine that’s really just the girl/boy next door. Books with all the feels. And, hello, Mr. Darcy anyone?