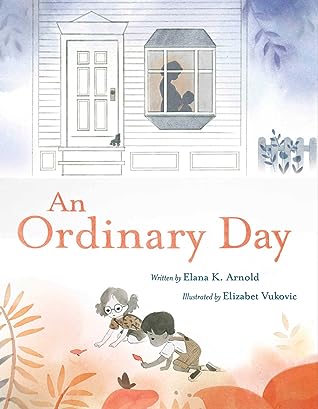 An ordinary day in an ordinary neighborhood turns out to be quite extraordinary in this moving story about the circle of life.

It’s an average day in the neighborhood—children play, roses are watered, and a crow watches over it all. But then two visitors arrive at two houses, one to help a family say hello to a new baby and one to help a family say goodbye to a beloved pet. This sensitive picture book takes a gentle look at life, death, the bonds of family, and the extraordinary moments that make ordinary days so special.

With gentle words and calm illustrations, this book takes on death and the newness birth brings as well.

This is a careful book, and that comes across in the gently colored illustrations. With swimming watercolors i calming hues, a normal neighborhood with two neighboring houses is presented. A doctor enters both, but what waits beyond is very different for each one. The idea of life and death, and the balance between the two is presented in a way which is emotional and yet, steers clear for becoming overwhelmingly depressing.

The text is simple and appropriate for even the younger end of the intended audience. It does make a nice read-aloud but for more serious topic moments.

A few, tiny things did hit me a little off. (Spoiler alert, now.....) The death is a dog while the birth is a human. Plus, the dog is put to sleep there among the family members with a syringe. This alone opened up a discussion which was more upsetting for the kids than the idea of death ever was. The caretaker/guardian reading this book to young children should be aware of this.

The Author...
Elana K. Arnold  writes books for and about children and teens. She holds a master's degree in creative writing/fiction from the University of California, Davis, where she has taught creative writing and adolescent literature. She is a frequent speaker at schools, libraries, and writers' conferences. She is the author of several acclaimed young adult novels including the Printz Honor book Damsel and National Book Award finalist What Girls Are Made Of, as well as her picture books What Riley Wore and An Ordinary Day. Currently, Elana is the caretaker of seven pets, only two of which have fur. She lives in Huntington Beach, California.


Elizabet Vukovic is a freelance illustrator born in Rotterdam, the Netherlands, where she still resides. As a kid she had quite an imagination, which she expressed mostly on paper, since acting out her ideas was an annoyance to her siblings. She ow devotes herself full time to illustration for children and other venues. When not obsessing about art (which isn't very often) Elizabet enjoys long bicycle rides, traveling, and bugging her elderly cats.