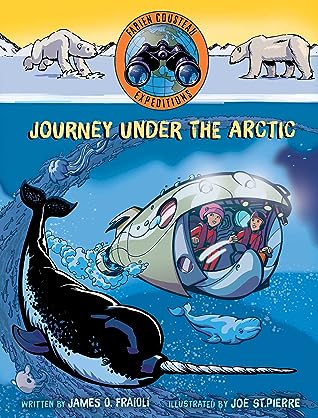 
Dive into the world’s coldest ocean in search of one of the rarest creatures on the planet​ in this second story in a series of graphic adventure novels.
Junior explorers Rocco and Olivia embark on an exciting journey into the frigid Arctic waters with famed explorer Fabien Cousteau and his research team. Together, they hope to find the rare dumbo octopus and uncover how this exceptional creature is able to live in such an extreme climate. To get there, they’ll board an icebreaker to travel to the Arctic Circle, and will come face to face with polar bears, puffins, Artic hares, and more. Then they’ll climb into a submersible and dive deep under the surface to see whales, narwhals, and other incredible species only found in these mysterious depths.
Join the team on this deep-sea expedition, and learn how the changing climate affects the ocean and its inhabitants, and discover what you can do to help save the planet!

I did have the pleasure of reading the first book in this series, but that is by no means necessary before diving into this one.

The authors dive off into the undersea (and a bit on land and ice too) of the arctic. The novel begins with a wonderful hook as it starts back in history with an ship, which was stuck in the ice and the crew didn't survive. From here, it races into more present day and an expedition up to the arctic with a few small adventures along the way.

The comic illustrations are nicely done, which is surprising considering the source. That end deserves a big thumbs up, flows well and offers everything it should.

The tale itself covers a large range as all sorts of creatures are discovered, shown in illustrated form, and accompanied by many details concerning everything from physical aspects to living habits. For sea life friends, there is a ton of useful information...and even involves creatures not every one has heard about. There are even extra tidbits about igloo building, inuit lifestyles and even other interesting facts. So, on the science and information end, this book is a gem.

As a graphic novel, it is an interesting attempt to bring across the information in a way young readers can connect with. The information is brought across in an understandable form, and with the graphics, it is eye-catching. Unfortunately, it didn't grab completely, though. While the first hook is great, it drops completely away. The explores make interesting discoveries and learn a lot, but there's very little drive to push any sort of plot forward. It becomes a travel with tons of interesting information...but just that. Which I found too bad because with a little more story and clear direction, even more reluctant readers might be really grabbed. Still, it is a nice non-fiction read and readers will learn tons about life in the arctic and under it.

The Authors...
Fabien Cousteau is the grandson of famed sea explorer Jacques Cousteau, and a third-generation ocean explorer and filmmaker. He has worked with National Geographic, Discovery, PBS, and CBS to produce ocean exploration documentaries and continues to produce environmentally-oriented content for schools, books, magazines, and newspapers. Learn more about his work at FabienCousteauOLC.org.

James O. Fraioli is a published author of twenty-five books and an award-winning filmmaker. Fraioli has traveled the globe alongside experienced guides, naturalists, and scientsits, and has spent considerable time exploring and writing about the outdoors. He has served ont he Board of Directors for the Seattle Aquarium and works with many environmental organizations. Learn more about his work at VesperEntertainment.com